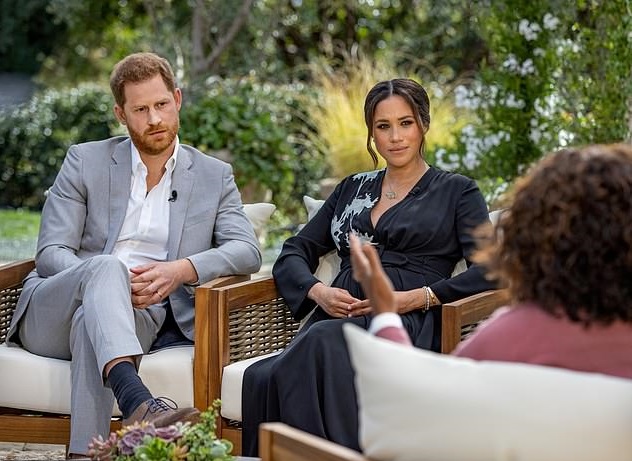 Prince Harry and Meghan Markle’s bombshell Oprah Winfrey interview has been nominated for an Emmy award.

Prince Harry and Meghan’s army of fans have predicted trouble for the royal family after the couple’s bombshell Oprah Winfrey interview was nominated for an Emmy.

The March interview, during which explosive claims of racism in the royal family were aired, has been nominated in the “outstanding hosted non-fiction series or special” category. While the nomination is, without doubt, a coup for the chat show queen, a win will draw further attention to the ongoing rift between Harry and Meghan and the royal family.

Among the shocking claims aired in the CBS interview were that the royals didn’t support Meghan while she was suicidal and that an unnamed family member discussed what Archie’s skin colour may be before his birth.

The nomination has sent fans of the Duke and Duchess of Sussex into overdrive, speculating it would widen the gulf between the couple and their British relatives.

“The palace is shaking rn,” wrote one fan.

“EMMYS REALLY WOKE UP AND CHOSE TO ABOLISH THE MONARCHY,” wrote another.

But not everyone thought the interview worthy of praise, notable Meghan’s dad Thomas Markle, who said Oprah had “taken advantage” of Harry while he was a “weakened man”.

“Oprah Winfrey, I think, is playing Harry and Meghan,” he said last month,

“I think she is using them to build her network and build her new shows and I think she’s taken advantage of a very weakened man and has got him to say things that you just shouldn’t be saying on television. She will disagree of course, and she may even sue me, I don’t care. But the bottom line is she is working Harry.”

Oprah’s interview sparked a new wave of memes of the TV host but non-profit The Slow Factory warned those who shared them were supporting “digital blackface”.

“While seemingly harmless, the problem with digital blackface is that it often reinforces negative stereotypes about Black folks such as they’re aggressive, loud, sassy and simply here for your consumption and entertainment,” the organisation posted on Instagram.

In their Emmy category, Harry, Meghan, and Oprah are in the running against My Next Guest Needs No Introduction with David Letterman, Stanley Tucci: Searching for Italy, United Shades of America with W. Kamau Bell, and Vice.

This marks the 10th Emmy nomination for Winfrey, who has been earning nods since 1989. She took home a trophy in 2000 for the made-for-TV movie Oprah Winfrey Presents: Tuesdays with Morrie, received the Bob Hope Humanitarian Award in 2002 and became a Hall of Fame honoree in 2014.

The winners of the Emmy Awards are due to be announced in September.

Oprah Winfrey’s production company Harpro Productions, allegedly earned up to £6.5m from the American TV network CBS for the rights to screen her highly-anticipated two-hour interview with Prince Harry and Meghan Markle.