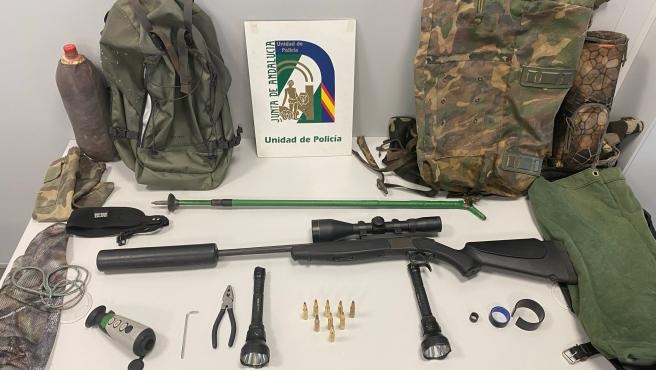 Two young men caught ‘red-handed’ poaching wild boar in Spain with a long-range rifle and a silencer among their kit.

Two men have been arrested after being caught red-handed in Seville’s Sanlúcar la Mayor, in Andalucia.  One of the men initially tried to escape from the officers and even started a short cross-country chase. The man was soon caught though and two arrests were made according to the Junta de Andalucia.

The two men were seriously prepared for the poaching mission and were dressed in camouflage whilst wearing balaclavas. There are also carrying a large backpack and were heavily equipped. The backpack was found to contain the remains of a wild boar that had been cut into pieces.

The men had a startling array of hunting equipment including a long-range rifle with a scope, a silencer, and independent thermal sight and other equipment. They were carrying various 308 mm calibre ammunition too.

Officers from the Community Police unit of the Environment Area of ​​the Seville Provincial Headquarters were able to arrest two men aged 24 and 26. The arrests were made on July 9.

The police unit had been working on an operation to track down illegal poachers. They had received information saying that poaching was taking place in multiple locations in the western part of the Seville province.

The two men who were arrested were caught on private property and they had not been granted permission to be there by the owner. Wild boar in Spain is not considered to be an endangered species but there is a season for hunting. According to the officers the men had been hunting out of season which is considered to be seasonal poaching. According to the Supreme Court seasonal poaching is a crime against flora and fauna.