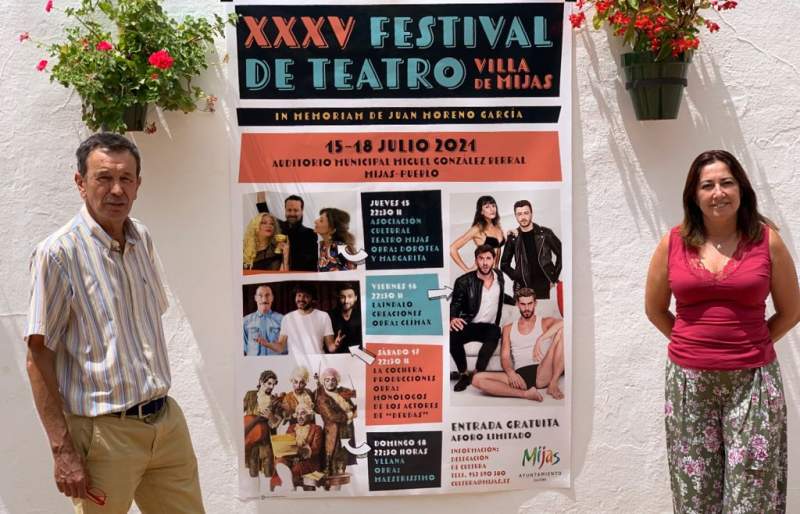 THE 35th Mijas Theatre Festival has begun, taking place at the Municipal Auditorium until July 18.

The theatre festival, which has been held in Mijas for 35 year, will host various productions.
The festival kicks off on July 15 with Dorotea y Margarita, by the Cultural Theatre Association, as well as a show by Cochera Producciones with Salva Reina, Miguel Angel Martin and Pedro Angel.
Held from July 15 to 18, all functions will take place at 10:30 p.m. in the Municipal Auditorium of Mijas Pueblo
Councillor for Culture, Veronica Ensberg, said: “Mijas dresses up to welcome this festival that was much-anticipated in the cultural programming of our municipality and the province. As is already characteristic of it, humour cannot be lacking in a truly luxurious program that will feature four shows.”
Those in charge of raising the curtain this Thursday, July 15, will be the Teatro Mijas Cultural Association with comedy Dorotea y Margarita, written and directed by Manuel España.
On Friday, July 16, it will be Laindalo Creaciones’ turn with a work that has been on the bill for seven years and which is set in Malaga province for the first time. The comedy is written by Alejandro Melero and directed by Isidro Romero and Paco Rodriguez.
On Saturday July 18, Mijas Auditorium will host Cochera Producciones and actors Salva Reina, Miguel Angel Martin and Pedro Angel. To close the festival, and direct from the Malaga Festival, there will be a show by the Yllana company that mixes chamber concert, satire comedy and period portraiture.
The shows at the festival in Mijas will begin at 10.30 pm and admission is free with around 500 seats available.
The news comes after the mayor of Mijas, Josele Gonzalez, and Councillor for Tourism, Jose Carlos Martin, announced that Mijas has 69 per cent more searches on eBooking.
Mayor Gonzalez said: “We are facing great news, always from the prudence that we must have due to the health situation and the evolution of vaccination, but this data shows that Mijas generates interest among the potential public to visit us. We are the destination that has grown the most in Andalucia in terms of percentage and that is a very good sign to begin the ascent towards stability and greater growth in our tourism industry, which generates so many jobs in the town.
Even though the most popular destinations are still large cities such as Madrid, Valencia, Sevilla, Barcelona and Granada, this summer travellers are looking for other types of locations and activities with fewer large crowds. Destinations such as Merida (Badajoz), Mogan (Gran Canaria) and Alcudia (Mallorca) have seen significant increases in online searches ahead of the summer.