Moreno calls for legal security in the fight against Covid 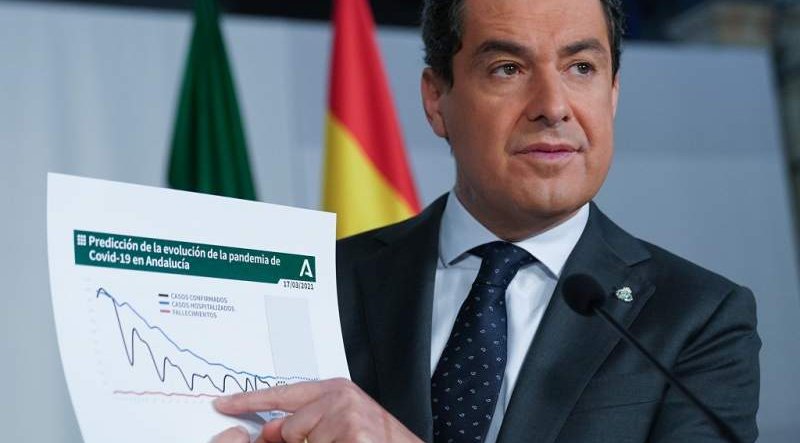 Juanma Moreno has asked the government to provide the legal security for the autonomous regions as Covid cases surge.

The President of the Junta de Andalucia, Juanma Moreno, has called on the government to provide the legal security for the autonomous regions as Covid cases surge and the Constitutional Court ruled last year’s state of alarm was illegal.

“That is the big problem, the improvisation that has occurred regarding the pandemic, as we saw yesterday with the Constitutional ruling, which jeopardizes a large part of the decisions that have been made. We need legal certainty and that we all make the same decisions in the autonomous communities, if we are not going to have serious problems,” he added.

Moreno also said that “in principle” no further measures are being considered in Andalucia but if the rate of infection continues to grow “more drastic” measures would be considered.

However, his Health Minister, Jesus Aguirre, recommends that beaches and parks be closed in Andalucia.

Regional Health Minister Jesus Aguirre met with the Andalucian Federation of Municipalities and Provinces on July 13 where he proposed the introduction of fresh restrictions that could upend what is left of Andalucia’s tourist season.

The restrictions proposed include “that the necessary measures be adopted for the closure of the beaches for leisure and recreation, except in the case of restaurant services installed on them that will be governed by the hours established for consumption in them” and to “intensify vigilance in the fulfillment of the measures of capacity, number of diners and distancing of tables in nightlife establishments, as well as restaurants and hotels, with or without music.”

Aguirre also suggested that the sale of alcohol in shops and off licences be prohibited before 10pm and that the police patrol outdoor drinking venues more rigorously.

Curfews and restrictions have been put in place in Valencia and are pending in Catalonia and Cantabria. The Junta de Andalucia has so far ruled out imposing further restrictions and maintains it does not have the power to impose a curfew. Spain’s nationwide curfew ended in May.