Bayern’s Robert Lewandowski on the radar of top English clubs 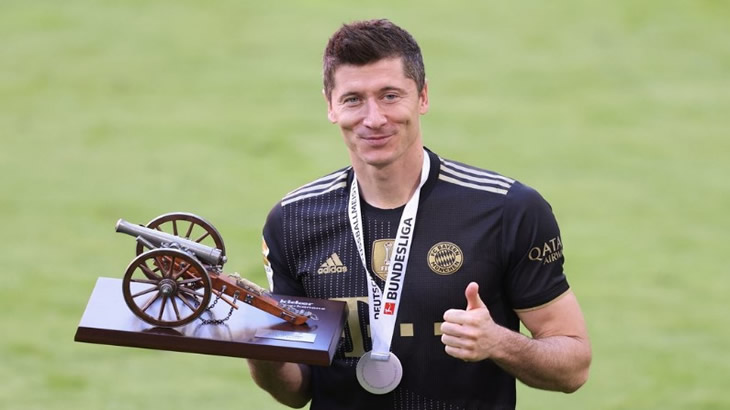 Robert Lewandowski, the Polish international, and star of Bundesliga champions Bayern Munich has been one of the most consistently prolific goalscorers in Europe for several years, and with his contract running down, due to end in 2023, several of Europe’s top clubs are reported to be putting out the feelers in the hope of luring the marksman away from Germany.

Julian Nagelsmann, the former RB Leipzig manager, who has just replaced Hansi Flick as head coach at the German champions, has commented on the matter, seemingly not happy with the situation “I think it’s normal for someone who scores so many goals that almost every club puts out a feeler. I think on one hand Robert knows what he has in Munich, what he has in this team”.

Adding, “I’ve already spoken to him and texted him. I’m not very fond of the first official act with a player being to immediately discuss his contractual situation”.

Lewandowski, now aged 32, joined the Bavarian club on a free transfer from Borussia Dortmund in 2014, and has since scored an incredible 294 goals in just 329 appearances, winning seven Bundesliga titles and the Champions League in 2020.

His seven years at the Allianz Arena have seen him average around 40 goals per season, and during the 2019/20 campaign the Poland international hit the back of the net an amazing 55 times, and was named UEFA Player of the Year.

A striker with this goal ratio is undeniably a hot property, even at 32, and English champions Manchester City are said to be interested in him if their pursuit of Tottenham and England captain Harry Kane draws a blank, plus Chelsea, who are chasing Erling Haaland, are also thought to have an interest in the Pole.

It does remain to be seen if Bayern’s Robert Lewandowski will stay where he knows he is always going to be guaranteed silverware, or if the challenge of scoring goals in the Premiership will appeal to him.