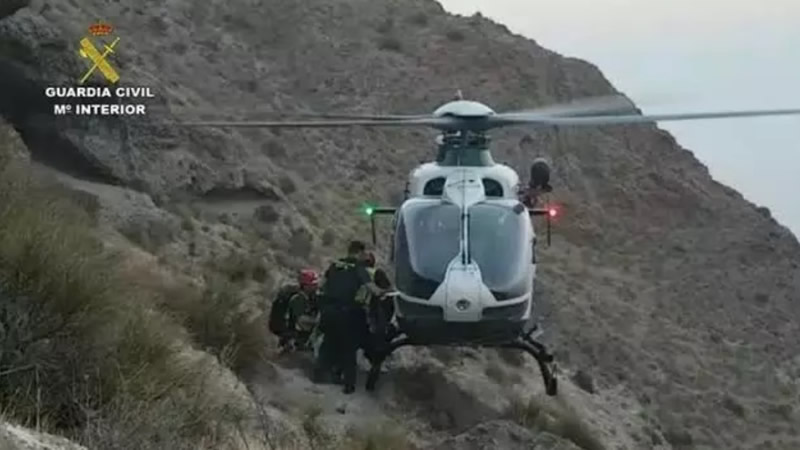 The Guardia Civil’s highly trained Mountain Service carried out three separate rescues on Wednesday 14, the first of which was the most complicated, when two men became suspended on a zip line in the Granada municipality of Quéntar, with no means of freeing themselves.
They were making the via ferrata called ‘La Colmena’, and one of them, before descending the zip line, had forgotten to anchor at the end, and as a result, the pulley left him stranded in the middle of the cable.
In addition, his harness was poorly regulated, which caused him to spin around and end up hanging face down, with no possibility of turning around, and when his partner tried to help him, and accessed the zip line, both of them ended up getting stuck in the middle of the wire.
They were fortunate enough to be able to call the 112 Emergency Service who put them in contact with the Guardia Civil whose officers immediately responded without delay to the scene, arriving just in time, as the Sereim officers discovered that the man who was hanging face down was slowly slipping out of his harness, and was about to fall to the ground.
Fortunately, they managed to reach the two men and rescue them, delivering them to the waiting ambulance which transferred them to the PTS hospital in Granada.
Later that same day, another incident occurred, in the Borreguiles area of ​​the Dilar River, where a group of six people was hiking when one of them began to suffer from muscular problems that prevented him from continuing the route, and so 112 emergency services received their call and deployed the Sereim unit.
En route to the incident, the Sereim officers provided instructions to the group over the phone until they arrived at the location by use of the Guardia Civil helicopter service, which evacuated the sick man, who thankfully later recovered and did not need hospital treatment.
Finally, late at night, a call was received reporting three people who had gone hiking in the Restábal-El Valle area, with one of them suffering a fall and breaking their hand, with officers locating them in a remote, difficult-to-access mountain area with a steep slope, through the use of GPS coordinates in the mobile phone, and having to travel on foot to reach them.
On arrival, it was discovered that the injured woman had an open fracture and a small hemorrhage, and so she was transferred by the Granada Guardia Civil to an ambulance that evacuated her to the San Cecilio Hospital in Granada, with the officers having to then return for the other two people and assist them in descending to reach their vehicle, as reported by europapress.es.
__________________________________________________________