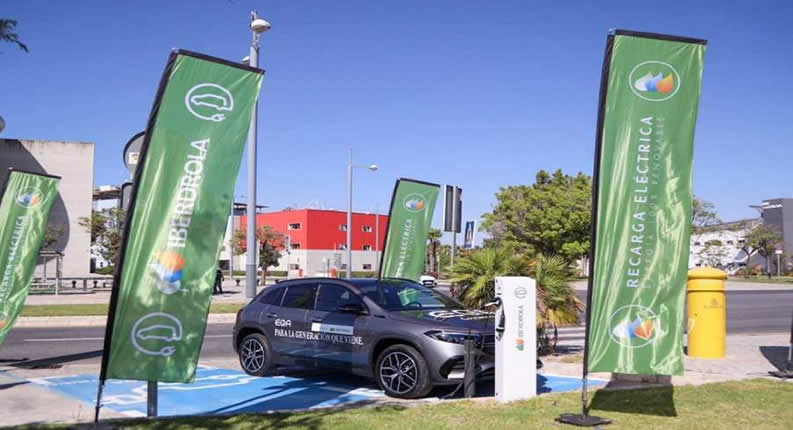 Iberdrola is the company that won the public concession for municipally-owned roads from Malaga City hall, to install the network of public charging stations for electric vehicles throughout the city, with the first two points being entered into service on Thursday 15.
Once completed, there will be a full network of 34 recharging points, in 30 locations, in the eleven districts of Malaga capital, each of them with two outlets, allowing up to 68 electric vehicles to be connected at the same time – 64 in semi-fast outlets of 22 kilowatts, and four with fast-socket outlets of 50 kilowatts.

Installing the network involves Iberdrola also performing all the necessary maintenance and operation of this infrastructure, with Thursday seeing the activation of the points located on Avenida Juan Lopez de Peñalver 14 and John F. Kennedy Square
The event to celebrate the activation of these first two points in the network was attended by Susana Carillo, the Councilor for Urban Innovation and Digitisation; Raul Lopez, the councillor for Territorial Planning; Ruth Sarabia, the councilor for the Campanillas district; and Antonio Fernandez, the institutional delegate of Iberdrola in Andalucia.
This network is being created in line with the Sustainable Development Goals (SDG) to promote and facilitate the recharging of electric vehicles and, therefore, encourage their use, a project to which Malaga City Hall is firmly committed, as well as the objectives set in the Covenant of Mayors for the reduction of greenhouse gases, as well as following the Sustainable Energy Action Plan (SEAP), which was approved by the Plenary back in 2011.
Available 24 hours a day, the stations will recharge vehicles using 100 per cent green energy from renewable generation sources, thus reducing the emission of 1.16 kilos of carbon dioxide per kilowatt-hour.
All of the recharging points of this network will be available in the Iberdrola Public Recharge application, the only one that incorporates verified information on all the electric vehicle chargers operating in Spain, both from Iberdrola and from the rest of the operators, in which, each charger is geolocated and you can reserve and pay from your mobile.
With an investment of €150 million, Iberdrola is deploying a sustainable mobility plan, with which it will intensify the deployment of charging points for electric vehicles in the coming years, as reported by 101tv.es.