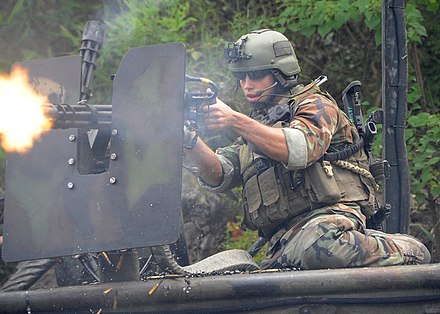 First woman ever completes US Navy special warfare training- is the sign of things to come?

For the first time, a female sailor has successfully completed the gruelling 37-week training course to become a Naval Special Warfare combatant-craft crewman. These are the boat operators who transport Navy SEALs and conduct their own classified missions at sea.

Navy officials said they would not identify the woman or provide more details on her, which is a routine military policy for special operations forces. The woman was one of 17 sailors to graduate and receive their pins on Thursday. She is also the first of 18 women who have tried out for a job as an SWCC or a SEAL to succeed.

The sailor’s graduation marks just the latest inroad that women have made into some of the military’s most difficult and competitive commando jobs — just five years after all combat posts were opened to them. She will now head to one of the Naval Special Warfare’s three special boat teams.

“Becoming the first female to graduate from a Naval Special Warfare training pipeline is an extraordinary accomplishment and we are incredibly proud of our teammate,” said Rear Adm. H.W. Howard III, the commander of Naval Special Warfare. “Like her fellow operators, she demonstrated the character, cognitive and leadership attributes required to join our force.”

“She and her fellow graduates have the opportunity to become experts in clandestine special operations, as well as manned and unmanned platforms to deliver distinctive capabilities to our Navy, and the joint force in defence of the nation,”  added Howard.

As a combatant-craft crewman, she’ll join a team that operates boats that transport SEALs and be part of classified missions at sea.