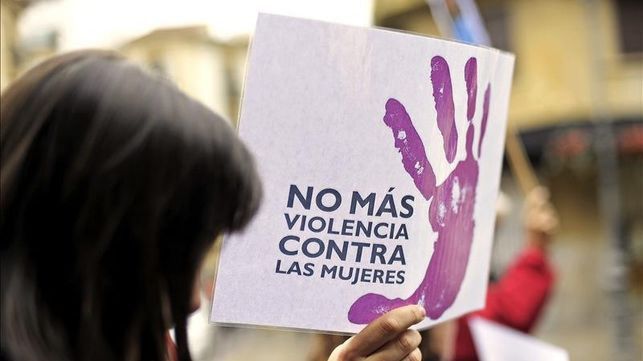 Malaga has come together to mourn the death of Mari Angeles, 46, and take action against gender violence.

Malaga has gathered together to mourn the death of Mari Angeles, the woman who was murdered by her partner on Thursday, July 15, at the gates of the school where she worked.
In a spontaneous and emotional tribute, people gathered at around 5pm in Malaga to protest against gender violence. Her neighbours remembered Mari with a flower crown in her neighbourhood of El Bulto, according to Malaga Hoy.
At around 8pm, the Violencia Cero platform organised a rally in which around 150 people attended. Among the mourners was a 60-year-old woman called Angela who said: “How many women do you need to die for you to find a solution? If they were men this would not happen”.
Protestors shouted: “Another one killed by a sexist!”, and held banners. Alvaro, who went with his mother to the demonstration, said: “Men also have to be part of this, otherwise we will not be able to change”.
The city of Malaga held a one minute’s silence yesterday, July 16, at the gates of the city hall in honour of Mari. Applause followed the silence that the mayor described as “longer than usual”. He also conveyed his “most sincere” condolences to Mari’s family, she leaves two older children.
The flags at Malaga City Hall were flying yesterday and will fly at half-mast today. The mayor has also decreed two days of mourning, saying that an incident like this “always shocks us, draws our attention”.
The councillor stressed that something like this “has to encourage us to do everything possible so that, from an educational point of view, the message of coexistence in peace, education in equality, in that respect for life that is essential permeate the whole world”.
The deputy delegate of the Government in Malaga, Teofilo Ruiz, expressed his “greatest rejection” for this sexist crime, which deserves “the response of the whole of society.”
He also said that the “brutality” of this death should urge people to think about the “small brutalities against women in their daily lives, such as the micro-chauvinisms that must be completely eradicated because these brutalities can be reached.”