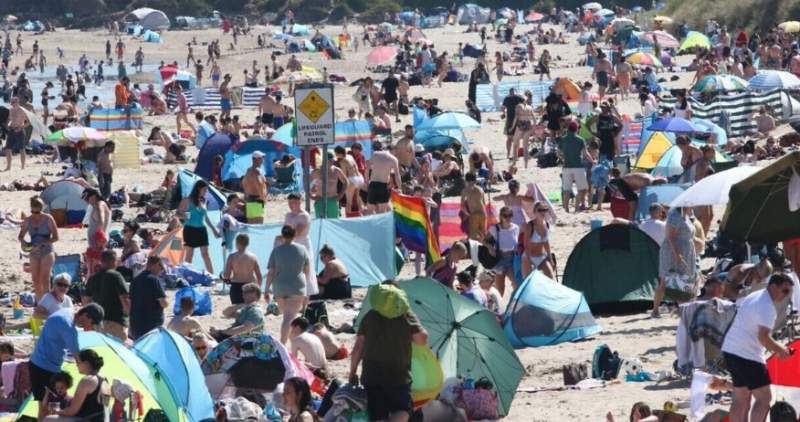 NORTHERN IRELAND has recorded what is believed to be its highest temperature ever, with County Down registering 31.2C (88.1F)

Northern Ireland has today, Saturday 17, registered what is believed to be the highest temperature ever recorded since records began, with the mercury in Ballywatticock, County Down going up to a stifling 31.2C (88.1F) at 3.40pm, according to the Met Office, and it has warned that temperatures could go higher still during the course of this afternoon.

There were also temperatures of 29.5C in Athenry, Co Galway, and 28.2C at Mount Dillon, Co Roscommon, but the hottest temperature previously recorded in Northern Ireland was on 12 July 1983 and 30 June 1976, when it reached 30.8C.

Many parts of the United Kingdom have seen hot temperatures today, with Coton In The Elms, Derbyshire registering 30.3C, Usk in Monmouthshire, Wales reached 29C, and up in Scotland, it was reportedly 28.2C in Threave, in the Dumfries and Galloway region, making today provisionally, the hottest day of the year so far in all four countries.

The Met Office has warned of even hotter weather being possible over the next few days as a band of hot air blows up from the Azores, as a result of which, they say that England and South Wales could well experience temperatures of up to 33C tomorrow, Sunday 18.

Of course, while the warm weather is welcomed by the sun lovers, with crowds reportedly hitting the beaches, 999 services are suddenly becoming inundated with calls, with the system saying it is “currently experiencing a higher than usual demand of callers”, and the public are being asked to please only make what are deemed as necessary calls.

Wales has its first day of Covid level 1 restrictions today, which means the rule on outdoor gatherings has been lifted, which will hopefully bring some much-needed business for the Welsh coastal towns this weekend, as reported by news.sky.com.

Today is provisionally the hottest day ever recorded in Northern Ireland 📈 😮