Albanian-Kosovar organisation specialising in robberies brought down in Malaga 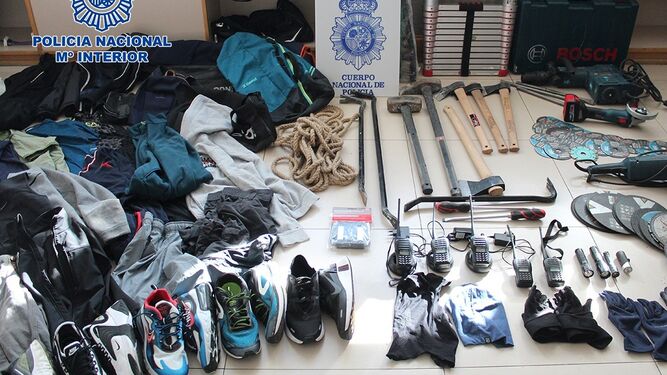 The National Police has brought down an Albanian-Kosovarcriminal organisation based in Malaga.

The organisation is charged with 57 crimes of robbery with force, including one committed when the residents were in the home.

The National Police said in a statement that a total of 21 people have been arrested for crimes committed in Antequera, Estepona, Torremolinos and Velez-Malaga, in the Valencian municipalities of Paterna and Chirivella, in the Cordovan town of Lucena, in Madrid capital and in the city of Móstoles, in the Cadiz town of Jerez de la Frontera and, finally, in Seville capital and Ecija.

Investigations began following a series of companies located in an industrial estate that were subject to robberies. Given the similarities of the robberies, police were led to believe that they had been committed by the same people.

The organisation focussed on obtaining cash from the safes of the companies, and they are also charged with the robbery of a farmhouse in which they stole jewels valued at 10,000 euros.

The meticulous nature of the robberies and the organisation became obvious during the investigation, with a “perfectly defined” modus operandi, and demonstrating the knowledge of how to override security systems and forcing open locks and safes.

The total amount of money stolen exceeds 500,000 euros, according to Malaga Hoy.

Some of the suspects had been living in Spain for over 20 years and had created a perfectly formed organisation, making it difficult for the police to track them down. The organisation also had the support of other Spanish people and would register homes and vehicles under their names, hindering police investigations.

In the first phase of the operation, police arrested 18 people and carried out eight searches, all of them in Madrid.

In the second stage of the operation, officers arrested three more members of the organisation, however, the investigation continues as many members are still unaccounted for.