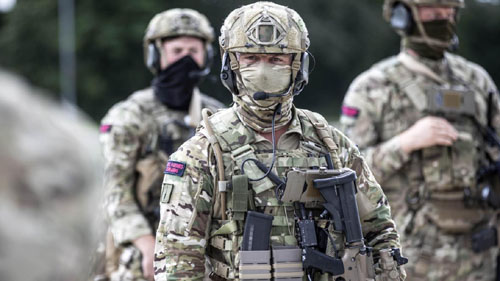 After more than two decades after 9/11, British spies are now turning their focus back to Russia and China.

The UK Special Forces are about to concentrate on some new ‘secret’ covert counter-state tasks, focusing on Russia and China, Royal Marines Brigadier Mark Totten revealed to the Times.

The British Royal Marines are to take over some of the “traditional” roles of the nation’s special forces units – the Special Air Service (SAS) and Special Boat Service (SBS) – as they are preparing for some new “higher risk” counter-state tasks, Totten said.

The brigadier himself is in command of a 4,000-strong “future commando force” that is about to share the burden of the special forces such as in maritime counterterrorist missions or some “partnered operations” that involve some “higher risks.”

According to sources in the army, special forces can also train the naval forces of countries near the South China Sea to defend against China.

Britain recently denied reports that Russia had fired warning shots near a British warship in the Black Sea.

According to the Moscow defence ministry, the HMS Defender entered Russian territorial waters and a ship then fired warning shots before bombs were dropped in the destroyer’s path from a jet.

US and UK intelligence have also accused Russian military hackers of being behind an ongoing cyber-campaign to steal emails and other information, including from parliaments.

The campaign is primarily focused on the United States and Europe. There are said to be hundreds of targets around the world, including UK political parties.

The same group allegedly stole and leaked Democrat emails during the US 2016 presidential election.

The US says the group belongs to the 85th Main Special Service Center of the GRU, which is sometimes called Fancy Bear, APT28 or Strontium, with one of the recent targets being the Norwegian parliament in the summer of 2020.

Now that America has withdrawn it’s troops from Afghanistan it can concentrate on global threats. American special forces can now turn their attention to Russia and China

Over two decades, counterterrorism became central to the special operations forces’ identity. From the earliest days after 9/11, special operators were deeply involved in tracking down terrorist leaders and destroying terrorist networks. They took the fight to al-Qaeda and other foes in countries from the Philippines to the Persian Gulf to the Horn of Africa.

In partnership with the U.S. intelligence community, the Defense Department’s secretive Joint Special Operations Command has developed the most remarkable manhunting machine in human history, as demonstrated by the raid that killed Osama bin Laden in 2011.