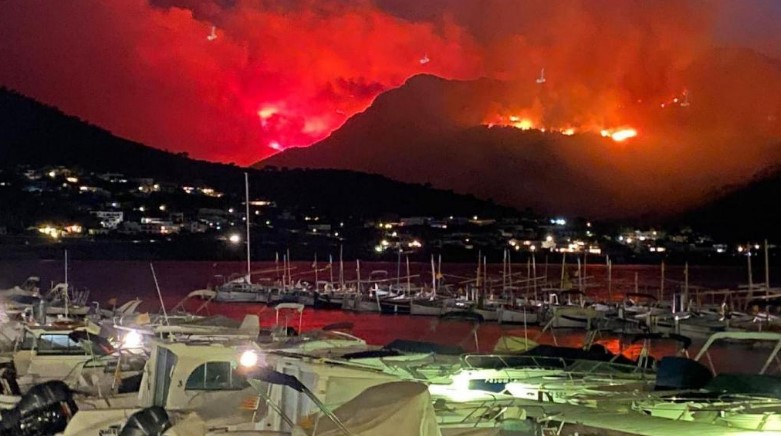 A massive fire that broke out Friday 16, in the Cap de Creus natural park, about 25km (16 miles) south of the French border, is still active tonight, Saturday 17, having already devastated 500 hectares (almost 2 square miles) of vegetation and forest, and is reported to be still spreading.

According to the fire authorities, around 350 residents have been evacuated from the municipalities of Llança and Port de la Selva, and so far there are reports of five minor injuries among the emergency teams, with four firefighters and one forester affected.

With the sunrise on Saturday morning, the operation to tackle the blaze from the air began again, but during the night the fire remained active and spread to its right flank, with Jordi Martin, the head of the Generalitat Firefighters in Girona saying his priority is to prevent the fire from spreading and reaching 1,000 hectares of damage (around 4 square miles).

Evacuated residents from Selva de Mar, Fener de Dalt, Mas d’Estel, and Mas Fumats, were given shelter in facilities of the Port de la Selva by the town hall, along with those evacuated later on Saturday from Vall de Santa Creu, Beleser, and Santa Isabel urbanizations, as the blaze spread out of control, tonight reaching the first line of houses in Mora Dos, Perebeua and Barlovent, as well as a farmhouse and 120 clients of the camping Port de la Vall.

Jordi Martin said he was hopeful that with more ariel power they could beat the blaze, and Joan Delort, the General Director of Fire Prevention and Extinction and Rescue of the Generalitat, reported that the Government of Spain has been requested to authorise France’s participation in fighting the fire.

On Saturday there were 90 ground crews, and 15 airborne craft tackling the fire, but military planes have been requested, such as the two that already joined this Friday from Zaragoza, and they were waiting for the arrival of French people who, according to Delort, “are on the other side. of the mountain”.

Officers of the scientific unit of the Mossos d’Esquadra are analysing the butt of a cigarette that was discovered, which ¡s thought to have possibly caused the fire, after being throw from a car window, and DNA databases are being searched in the hope of finding a culprit, while an investigation continues into other possible causes of the ignition, but it has been said the full extent of the law will be brought against anybody who is found to be guilty of starting this Girona forest fire, as reported by 20minutos.es.