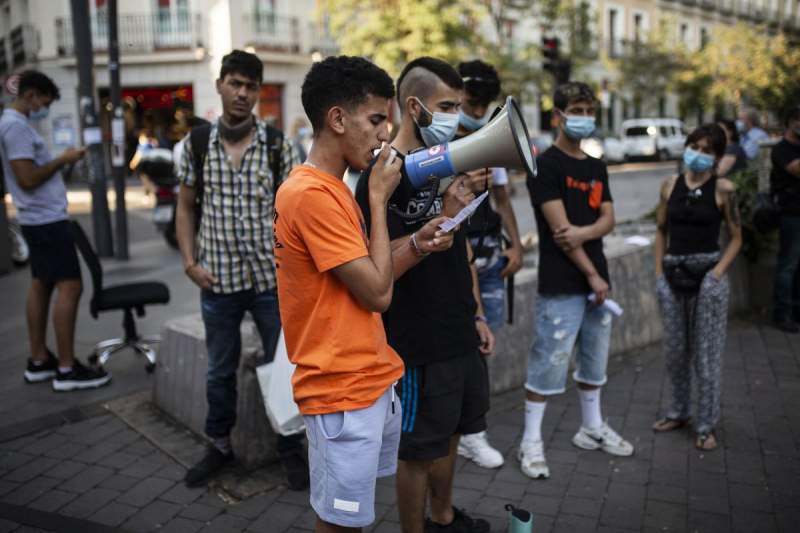 Moroccan migrants who are still living on the streets of Ceuta are demanding recognition from the Spanish government.

About 200 Moroccan migrants, mostly adults, gathered together on Saturday in front of the Government Delegation in Ceuta and demanded what thye called a “dignified reception”.

They are part of the almost 3,000 that have been living on the streets of Ceuta for the past two months, after the massive entry they made through the breakwaters of the Tarajal and Benzú borders that separate Ceuta from Morocco.

The protest responds to the convocation of the NGOs No Name Kitchen, Maakum and Elin at the request of the migrants themselves “to stop being invisible,” the organisation explained.

The group of migrants has at all times respected the prevention measures against the Covid-19 pandemic, with the use of masks by the attendees and a safe distance, now they demand a comprehensive and dignified reception in the face of a humanitarian emergency “that has been perpetuated over time”, as well as access to the Humanitarian Attention program of the Secretary of State for Migration.

“Resources such as the CETI (Center for the Temporary Stay of Immigrants), have been made available to groups according to their country of origin, denying entry to the Maghreb population,” they complained, feeling victims of the “political game” between Spain and Morocco. “Spain is responsible for the situation of helplessness in which we find ourselves. Let it be recognised that they have used us as a bargaining chip.”

Reda, one of the twenty-somethings who entered Ceuta on May 17, has acted as spokesman for the group demanded that the police raids on public roads and the returns to Morocco “carried out without proper legal procedures” be stopped.
About 200 Moroccan migrants who have been living on the streets of Ceuta for two months demand a dignified reception

“Many of us continue to be victims of forced returns automatically and without legal guarantees. Young people, sometimes minors, are detained on the street, forcing us to get into police vans to take us to the border, where we are forced to be expelled. of Spain. We live in a constant state of alarm and tension as a result of a police state in which raids are constant. ”

“We want to be allowed to work, that our professions are valued in order to be able to contribute with our abilities. That the right to migrate be recognised. If they bring us back to our country, many of us will be at risk of suicide, myself included,” pleaded the spokesman.