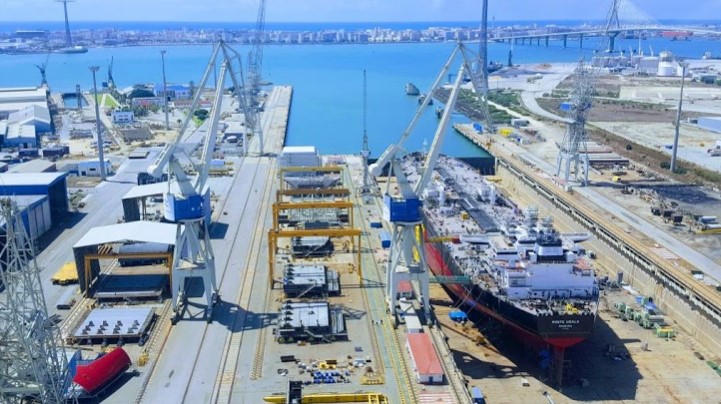 Cadiz shipyards are going to be busy for the immediate future, which is excellent news for the local workforce, as Captain Juan Jose Nieto Conde, the head of the Building Inspection and Works (ICO) from the Arsenal of Cadiz, explains, “Right now there are five ships in different stages of construction, quite a challenge for Navantia and for us”.

ICO is a unit of the Spanish Navy that is in charge of “providing engineering support for the maintenance of ships in the Bay”, as well as reviewing the technical documentation, and supervising the tests in the constructions carried out in the shipyard.

As captain Nieto added, “And to this, the BAM-IS will soon be added, as we expect the execution order for this underwater intervention vessel to be signed in the coming months. In total, the construction of six military ships will coincide in the Puerto Real and San Fernando shipyards”.

The captain pointed out that although Navantia is the one who builds the ships, the work is jointly carried out between the company, the Navy, and the Ministry of Defence, “We have very demanding requirements. Our Navy is first class and we must make sure that we have the ships we need, that what we get passes the tests. For this reason, civil companies and Defense work hand in hand”.

Speaking about the new BAM-IS, which will “replace a ship that has fulfilled its missions, such as the ‘Neptune’, which incorporated sensors that worked in isolation. Now it is intended that this new generation underwater intervention boat will have a representation system that works in an integrated way with all the sensors, and, in addition, it will incorporate unmanned vehicles and state-of-the-art aquatic sensors”.

All this, says Captain Nieto, within very tight deadlines, since it must be ready for when the submarine enters the last phase of construction, as reported by lavozdigital.es.