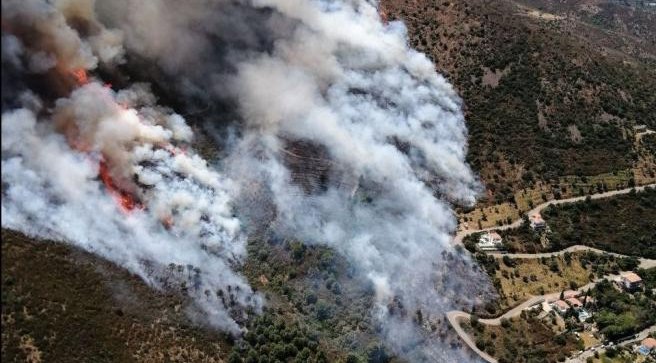 High weekend temperatures across the regions ignited a series of raging forest fires across Spain.

The high temperatures registered this weekend in practically all of Spain have facilitated the spread of several forest fires that struck several areas of Catalonia, the Valencian Community, Galicia, La Rioja and Castilla-La Mancha.

The one still active at the moment is the one that was declared Sunday afternoon on Mount Yerga, located between the Riojan municipalities of Villarroya, Quel and Autol, where some 200 hectares of the wooded area have so far been burned away.

The situation is so serious that it has forced a hundred members of the Military Emergency Unit (UME), from the Zaragoza base, to be put into action in the area. The firefighting services are concerned about the speed and direction of the wind in the area, as this can influence efforts to control the fire.

At the moment, it has not affected the densely populated urban centres located close to Mount Yerga and no evacuations have been ordered.

The fires in Castilla-La Mancha that started on Sunday in the municipality of San Martín de Montalbán (Toledo) are now thankfully under control, according to the emergency services. A total of 26 emergency workers and firefighters worked throughout the night in the fight against the flames- there are still six people left in the area doing minor extinction work.

Without a doubt, the biggest fire of the weekend was that of the Cap de Creus Natural Park, in Girona, which the Firefighters declared controlled late Sunday afternoon, but not until the blaze had destroyed some 415 hectares of forest land.

According to primary investigations, the origin of the fire, where more than 155 emergency personnel were involved, was the worst of the year in Catalonia to date, was a cigarette butt that someone threw from a moving vehicle. Investigators are sweeping the area looking for clues, whoever the perpetrator, or perpetrators, were, they are in serious trouble.