Meet Top Quarterback Prospect for the class of 2030: Zain Hollywood 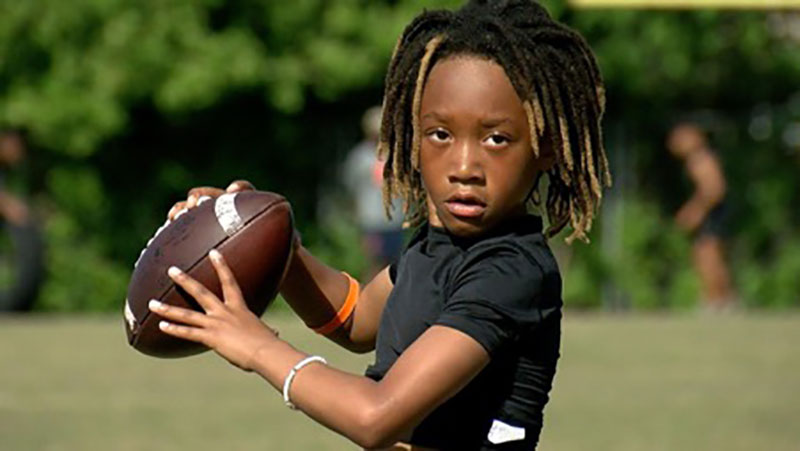 Dubbed “Lamar Jakson 2.0” because of his dynamic abilities.

With his own custom shoes, logo and nickname Zain Hollywood is on the fast track to stardom. At 4-foot-3 and weighing in at 52 pounds the eight year-old already won 3 flag football world championships in three different divisions. Out of 101 games played in the last year and half Hollywood and his team won 97 of them.

Featured on Sports Center, ESPN and several other media outlets like Texas FOX News, ABC News and Yahoo News, the 8 year-old is already known as the top quarterback prospect in the country for the class of 2030.

Modeling his game after who he watches daily, the young star was affectionately dubbed “Lamar Jackson 2.0”due to his dynamic abilities. Zain enjoys playing basketball and soccer and practices football daily. Getting amped for a big game to the tunes of Morray’s “Quicksand” and “Anything” by Migos, the quarterback phenom is already a 22 time flag football champion.

“Since I was five, I just started throwing the ball and shakin’ and bakin’ and stuff,” young Zain expressed his love for the game. His father, Wali Muhammad, took note of his son’s athletic abilities early on. “When he was six months old, he threw his bottle across the room,” the proud father said. “It had somewhat of a spiral and I kind of got a twinkle in my eye. You know what, that’s my guy.”

The Makings of a Football Legend

“Currently he is the number one quarterback in the class of 2030,” quarterback coach Baylin Trujillo said after recently working with Hollywood. Living in Austin, Texas, the father and son duo travels the country for flag football tournaments and quarterback camps.

With a love for the game that runs deep the young star can be found always practicing. Modeling his game after league greats such as Patrick Mahomes, Lamar Jackson, Kyler Murrey and even Tom Brady the young Zain Hollywood said: “I take away from him what his throwing ability is,” he continues, “I like how he does his reads and sees the opening.”

“He always wants to train, get better,” Wali said. “Never taking days off. I mean, the first day of spring break, we’re not at Disney, or anywhere else. We’re here training.” Describing his son as having, “the top half of Patrick and the bottom half of Lamar,” Wali added, “He’s lethal on his legs, too, and can throw the ball on the run, finding targets and keeping his eyes downfield.”

Through a family connection Hollywood travels back and forth between Austin, Texas and Atlanta to train with former Georgia Bulldogs and Dallas Cowboys quarterback, Quincy Carter. When asked about Hollywood’s skillset Carter replied: “It’s a little difficult, to honestly tell you, which one is going to stand out. His legs or arms. I would love for him to have that Patrick Mahimes upper body with the Lamar Jackson lower body, but that’s a perfect world. But I can see the skill set now and it’s about developing those skills.”`

“I get a lot of good training and I get to learn more from other trainers,” Zain said. “And that’s what I get to do in the games from what I learn from the trainers and that’s how I start building up my game.”

In an exciting continuation of Zain Hollywood’s training tours, he recently just got back from training with Coach Glenn, who football fans would recognize as Antonio Brown’s trainer. With plans to head into Maryland to train with Roc Carmicheal in late August, Hollywood’s summer roster is packed with several celebrity football camps, featuring Odell Beckham, Quincy Carter and Baker Mayfield.

Having tragically lost his grandfather and cousin to cancer, young Zain never forgets to take time out in order to encourage his social media followers to ‘‘stay healthy, exercise consistently, and believe in themselves’’.

Under the GoinHollywood Scholarship Program the doors for underprivileged youth with a love for sports will be opened. By the time Hollywood reaches middle school he wants to open his own training facility and help young children accomplish their dreams. With a love for reading, math, sports and family, young Zain has been described as having the ability to “block out fanfare and to focus on the task at hand.”

Wanting his game to be part Mahomes, part Jackson and part Kyler Murray, young Zain Hollywood had laid down solid roots. “I would go to Bulldogs and Texas and some other places that are so special. Where my family is from, that is where I would go,” he said when asked about his future aspirations. With modelling and acting included on Zain’s list of interests, the next few years are going to be exciting times in football.