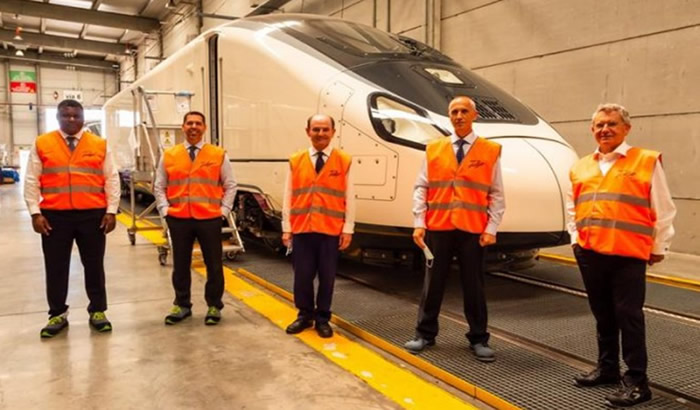 Repsol and Talgo have both confirmed the signing of an agreement today, Monday 19, from which they plan to jointly develop projects to promote the creation of renewable hydrogen trains, thus promoting emission-free rail transport in the Iberian Peninsula.

This agreement was signed at the Talgo plant that the train manufacturer has in Las Rozas district of Madrid, where the executive director of Industrial Transformation and Circular Economy of Repsol, Juan Abascal, and the president of Talgo, participated in the signing, at the Oriol Palace, also present was the president of Petronor, Emiliano Lopez Atxurra.

Through this alliance, the two companies will provide a comprehensive solution to make the renewable hydrogen train a reality, with Talgo in charge of the design, manufacture, and start-up of the new self-propelled medium-distance and commuter trains, while Repsol will provide its renewable hydrogen generation infrastructure, and the logistics that the company has, to supply the railway network.

The energy company and the railway company stressed that this collaboration will promote the achievement of one of the objectives set in the Hydrogen Roadmap, approved by the Government last October, which establishes 2030 as a goal by which to have two commercial train lines powered by renewable hydrogen.

The group, chaired by Antonio Brufau, is the leading producer and consumer of hydrogen in the Iberian Peninsula, and operates the largest hydrogen plant in Europe, in Cartagena, Spain, with the company using this gas as a raw material in its industrial centres, which are already evolving to become multi-energy poles where renewable hydrogen is a strategic pillar to achieve net-zero emissions by 2050.

Repsol plans to be a major player in the development of renewable hydrogen in the Iberian Peninsula, with the objectives of installing a capacity of 400 megawatts (MW) in 2025 and exceeding 1.2 gigawatts (GW) by 2030.

As a result, the company, led by Josu Jon Imaz, together with the project at its Cartagena plant, is implementing numerous projects in the industrial centres where it operates, including the Basque Hydrogen Corridor, which was launched in February this year by Petronor-Repsol, and which already brings together 128 companies – among which is Talgo – in the Hydrogen Valley of Catalonia.

Talgo has a hydrogen-powered train in development, that will allow the decarbonisation of railway lines, especially those of the secondary network that have not been electrified, and has developed its Vittal One train, a modular medium-distance and commuter solution, powered by a hydrogen cell, that will be the first dual hydrogen-electric train.

The company plans to put its first train on track next November, which will allow it to demonstrate and validate the concept under conditions similar to those of commercial exploitation, as reported by merca2.es.