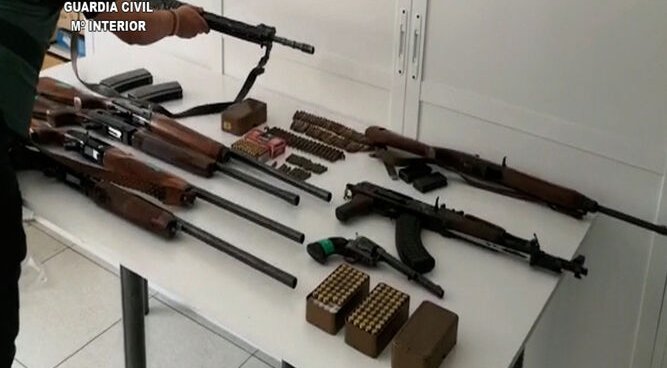 Guardia Civil have seized ‘Weapons of War’ and arrested 26 people linked to a criminal gang that distributed drugs in Campo de Gibraltar, and Marbella and Almeria in Spain.

The Guardia Civil has reported the dismantling of a criminal organization that was found to be distributing large amounts of hashish on the eastern coast of Malaga and that had contacts and infrastructure setup in Campo de Gibraltar, Marbella and Almería.

Operation ‘El Palo’, has seen the arrest of 26 people for the alleged crimes of belonging to a criminal organization, crimes against public health, and the usurpation of civil status.

Further charges are for the illegal possession of weapons and an arsenal of what officers called ‘weapons of war’ in reference to some very heavy duty and dangerous machine guns, normally only used by the military, which were found at one of the sites.

The gang were said to be very violent and did not hesitate to ram their vehicles against the officers who were pursuing them.

The operation began months ago when a unit from SIVE of the Malaga Command detected a suspicious boat on the beach in Malaga.

A search was quickly organised by land and by sea, which was supported by a patrol boat from the Maritime Service. Officers managed to intercept 715 kilos of hashish, the boat and a van in which they were going to transport the bales of drugs.

Further investigations of the organization soon identified its functions and links, and with prior judicial authorisation, the exploitation phase of the investigation was carried out. 17 searches were made in the neighborhood of El Palo, Rincón de la Victoria, La Línea, El Ejido and Roquetas de Mar.

Officers seized a total of 3,362 kilos of hashish, three boats, fuel, 16 vehicles (two high-end that had been stolen) hunting, short and war weapons, as well as abundant ammunition.
The case continues, please remember to check back for updates.