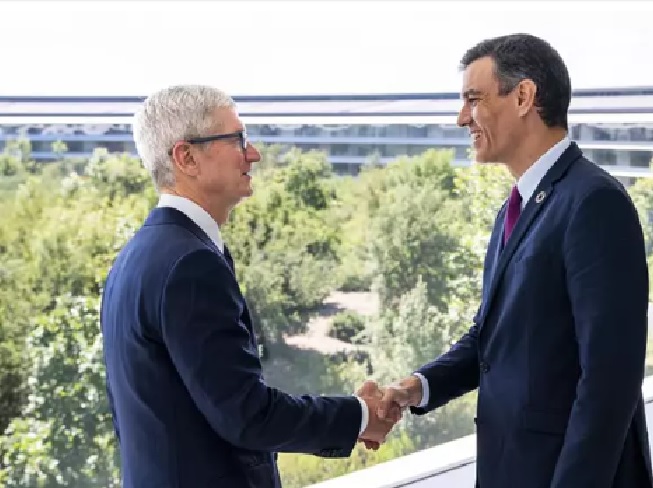 Pedro Sanchez met for talks tech in Silicon Valley with Apple boss Tim Cook on the last leg of his economic tour.

The President of the Government of Spain, Pedro Sánchez, met with the executive director of Apple, Tim Cook, on Friday, July 23, at the Cupertino headquarters.

The aim is of promoting the Recovery Plan for the Spanish economy and attract investments from the technology giant for the digital transformation that the Executive plans to undertake.

Sánchez wanted to dedicate the last day of his economic tour of the United States to the technology sector and therefore travelled to the renowned mecca of technology, Silicon Valley, located in the San Francisco Bay, where he met with top executives of the main tech companies, starting with Apple.

“Productive meeting with Tim Cook in San Francisco. Spain knows that digital transformation is a priority and the Recovery Plan offers us a unique opportunity to face this challenge. There is no better occasion for big technology companies like Apple to invest in our country”, Sánchez said in a message he posted on Twitter.

The meeting had to be held with the utmost discretion, due to the security restrictions of the Apple company, for intellectual property issues. Therefore, the delegation that accompanied Sánchez consisted only of the Minister of Industry, Trade and Tourism, Reyes Maroto, and the two main advisors of his cabinet who are accompanying him on this trip: the secretary-general of the Department of Economic Affairs and G20, Manuel de la Rocha, and the director of the Department of Foreign Affairs, Emma Aparici.

The official Spanish Moncloa photographer was not allowed to enter the mythical Cupertino building and the only two photos that prove the meeting happened were distributed by Apple.

After the meeting, Sanchez moved on to the headquarters of another of the American technology giants, and the world, specifically, the garage where the company HP was born, which has converted into a museum and is considered the ‘ground 0’ of Silicon Valley. There he met with the CEOs of Intel, PayPal, Qualcomm, Levi’s and Microsoft.

Sánchez will also take advantage of his U.S. tour and his presence in Silicon Valley to pave the way for Spanish entrepreneurs to enter the American technology sector, with a meeting at HP with Spanish investors and entrepreneurs, who have travelled with him to the United States.

Sanchez was accompanied on his U.S. tour by the executives of the startups Redpoint, RatedPower, Adara Ventures, Wallbox and Carto.

To close his tour, the president will hold a press conference at 2:00 a.m. Spanish time to report on his journey and potential business deals- just after he would have been interviewed on the Bloomberg Technology channel.