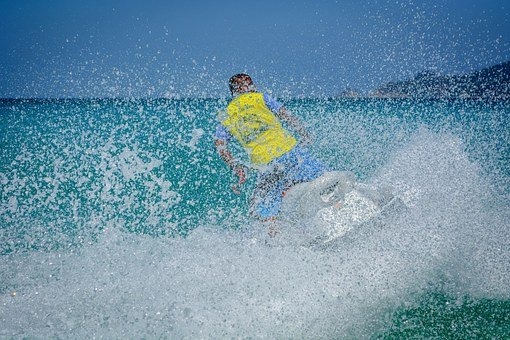 A Fuengirola lifeguard has been surprised by a beachfront proposal where the future groom to be arrived on a jet ski to pop the question.
Karol is a Fuengirola lifeguard and Enrique set out to surprise her on the same beach where the pair met. Karol was totally surprised as a jet ski approach the beach from the sea carrying her partner and father-in-law to be. As the jet ski approached, Enrique could be seen, complete with a giant inflatable engagement ring wrapped around him.
Fuengirola beachgoers soon gathered round, and once they realised what was happening they yelled for Enrique to drop to one knee, which he soon did after he had safely recovered the ring from a pocket.
“On the beach where we met, what better place to ask you to marry me?”, said Enrique.
The crowd around the pair burst into cheers, yelling: “How beautiful, how beautiful!”
According to El Espanol, Enrique had been planning the surprise for some time. “Many times the proposal is something very intimate, but why make an expensive trip if we can really share it”, said Enrique.
“I’ve been organising this for a month or so, I’ve been preparing everything: the suit, the float, the jet ski. Only the driver, who was my father, knew about it, and I had to tell them to organise it. I told my friends and family that they had to be on the shore at that time, and that was it. Top secret.”
The pair now has a wedding to plan, and it is sure to be unique. “It’s not so important the money or the cost as the originality and that people have a good time. When we do the wedding, that’s what we’re going to take into account the most, that people will be part of it”, added Enrique.