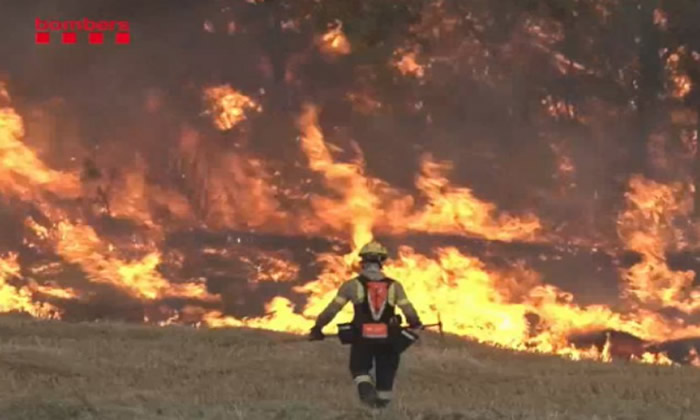 All areas of Spain are at risk. Image: Bomberos Catalonia

A forest fire that broke out on Saturday afternoon (July 24), in Santa Coloma de Queralt, in the province of Tarragona, has continued to spread uncontrollably through the Barcelona region of Anoia, today, Sunday, July 25, fuelled by the strong wind, having already incinerated almost 1,400 hectares of forest.

This blaze is thought to have been caused by a cigarette butt or a spark from a vehicle, and by mid-afternoon today had brought the firefighting teams to a critical situation, fearing that it will continue to spread towards the municipality of Sant Martí de Tous and possibly result in the burning of 5,000 hectares.

There is some hope on the horizon as weather reports are for a drop in the winds overnight, along with the temperature, and possibly with some rain showers on Monday

By late afternoon, it was deemed necessary to vacate the Ca n’Aubereda de Sant Martí de Tous urbanisation, and to order the confinement of the 1,200 residents of this municipality, along with the neighbouring population of around 130 residents of Santa Maria de Miralles, due to the proximity of the fire and the smoke generated.

Mossos d’Esquadra officers in charge of investigating the cause of the fire, have already managed to delimit the point where it started, next to the shoulder of the C-241 road as it passes through Santa Coloma de Queralt, thanks to the videos and testimonies that they have of the moment in which the first flames ignited.

Smoke from this huge blaze was visible from different parts of Catalonia and even from Barcelona and its metropolitan area, whose residents have been left with a dark sky, the smell of burning, and, in some cases, traces of ash on the ground or vehicles.

A total of 138 crews have been fighting the flames on the ground, along with another 26 from the Military Emergency Unit (UME), plus 18 airborne assets, which means about 700 people have been mobilised to stop this fire, as reported by 20minutos.es.