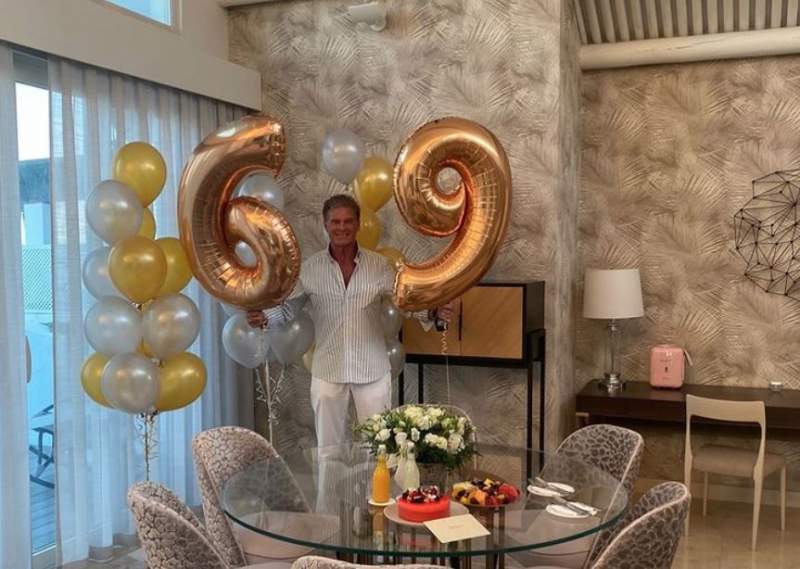 David Hasselhoff looks fabulous he celebrates his 69th birthday in Spain’s Marbella.
David first appeared in the public limelight in the 80s when he starred as Mitch Buchannon on Baywatch. In the show he showed off his stunning physique and it appears that now, some years later he has barely aged. David has spent summer in Spain with his wife Hayley Roberts and the pair chose to spend his birthday on the Costa del Sol.
David took to Instagram to a share photo of his birthday celebrations where he looked better than ever. He celebrated in style wearing a striped shirt and white trousers on his 69th birthday. He was happy to show his age and sported giant inflatable balloons too.
David thanked the Puento Romano resort, who had hosted the celebration for him. David married his wife Hayley in a stunning ceremony in Italy’s Puglia in 2018.
‘For the longest time I didn’t think it was right to marry Hayley as I was so much older and I didn’t want to take away the fun and the youth and the excitement of growing old together and having children’, David told OK! Magazine previously.
‘We’ve been together for about seven years and we’ve had such a great time. I’ve realised how much I love Hayley and how much we’ve become part of each other’s life.’
In other Spanish news, A Place in the Sun guest was left stunned by partner’s huge list of demands in Spain. The couple were buying their first property together, but had lived together for some years.
One guest was left in stunned silence after her partner reeled off a long list of demands for their potentially property in Spain. A Place in the Sun whisked viewers off to the Spanish coastline to find Jacqueline and Chris the perfect property abroad on the show which was hosted by Scarlette Douglas.
The couple had high expectations as they wanted to spend around £150,000, but had £50,000 extra if they needed it in order to find the perfect place.