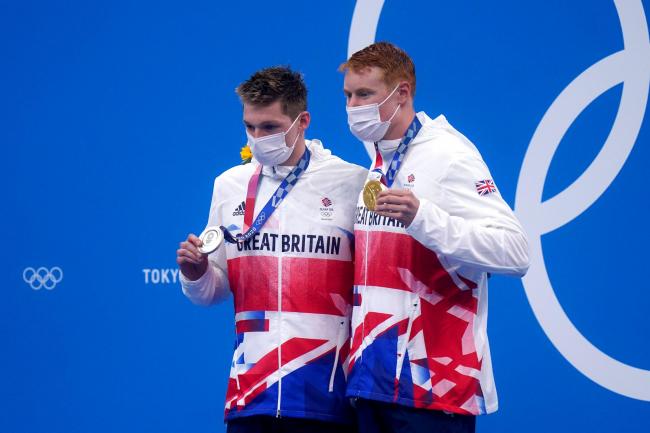 Tom Dean, who twice contracted coronavirus last year, and Duncan Scott have made history in a stunning 200m freestyle delivering an incredible one-two for Team GB as the medal rush continues.

Dean, 21, of Maidenhead, Berks, was third heading into the final 50 metres while Scott was down in sixth at the halfway stage, but the pair finished strongly.

It came after another earlier win for Team GB as Georgia Taylor-Brown scooped silver in the triathlon after battling back from a flat tyre- almost three months after an injury left her using crutches.

She entered the race as the reigning world champion and one of the favourites for the title but was forced to play catch-up on the 10 kilometres run after getting a flat tyre on the last lap of the bike leg.

Dean, watched on by fellow Olympic champion Adam Peaty, James Guy and a host of other British swimmers, punched the water as he celebrated his victory.

Going one-two with another Brit on the podium. What more could you ask for, really? I contracted Covid twice in the last 12 months, in the last season. I had six or seven weeks out during an Olympic year which is essentially unheard of,” said Dean to the BBC.

He added, “When I was sitting in my flat in isolation, Olympic gold seemed like a million miles off. But here we are.”