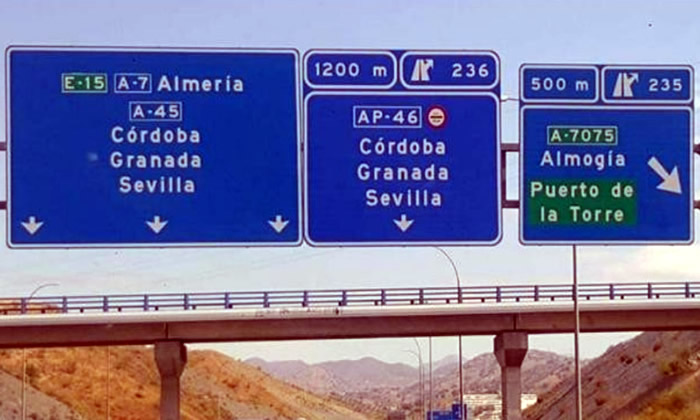 'Jaén Deserves More' asks why the province is omitted from A-92 signage. image: abc

A citizen platform called ‘Jaen Deserves More’ has denounced what it classes as a new discrimination against the province since its name does not appear on the signage panels of the new exit 234 of the A-92 motorway that leads to the A-44, through Granada.

“Another affront that shows the neglect of Jaen, and how nobody pays attention to the interests of this province”, says the platform, since the vehicles that travel from Malaga towards Granada on the A-92 must use the new junction of exit 234, which gives access to the Granada bypass of the A-44, with signage above the road displaying the names of Granada, Cordoba, Almeria, and Murcia, but not that of Jaen.

As a result, ‘Jaen Deserves More’ have asked Jaen’s political leaders to demand that access to Jaen is also signalled on those panels both in front by the A-92 – where only Murcia and Almeria have been listed – as well as in the new exit where it is indicated that you can head to Granada and Cordoba, without mentioning Jaen, even though it is one of the main directions.

The unease of the platform is all the greater since in 2018 it presented a motion in the Diputacion de Jaen in which it demanded that the provincial administration urge the Government of Spain and the Junta de Andalucia to mark tourist destinations with specific panels on various highways of Spain, a motion that was rejected, because, according to ‘Jaen Deserves More’, the PSOE argued that it would be taken into account in the strategic plan.

As Juan Manuel Camacho, a spokesman for the platform points out, “Three years have passed, and they still don’t do anything for Jaen, when, in fact, this platform presented graphics, with destinations to be marked according to the regulations, such as the heritage cities of  Ubeda and Baeza, the four natural parks, cities declared a Historic Site such as Jaen, or towns declared a Historic-Artistic Site such as Baños de la Encina, or Alcala la Real, and even historical-cultural destinations such as Castulo, among others”.

In addition, the platform pointed out that the old Bailen-Motril highway was later called the Sierra Nevada-Costa Tropical motorway, “erasing all references to Jaen at a stroke, despite the fact that TurJaen, the association of hotels, campsites, and companies in active tourism, had also asked in 2018 for the said A-44 be called the Jaen, Inland Paraiso motorway”, as reported by sevilla.abc.es.