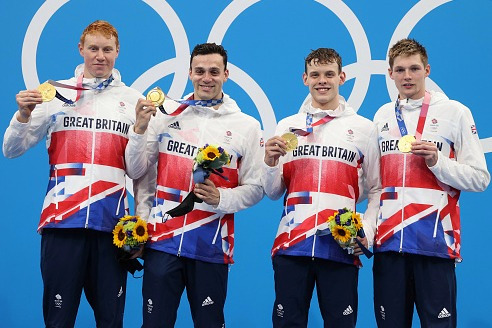 Team GB has won three gold swimming medals at the Tokyo Olympics for the first time since 1908 after a stunning victory in the men’s 4x200m freestyle relay.

Tom Dean and Duncan Scott won gold and silver respectively in the 200m individual freestyle yesterday, giving them a great chance of claiming a second medal after being joined by teammates Matthew Richards and James Guy.

The ‘fabulous foursome’ won in six minutes 58.58 seconds, just 0.03 seconds shy of world record pace, and basically obliterated the rest of the field in a stunning display.

Richards, aged only 18, might have been considered something of a weak link on the third leg but performed magnificently, helping to further extend the lead before handing it over to Scott.

The result was now in no doubt and Scott, who could possibly yet gran another four medals at these Olympics, anchored Team GB to another gold.

Calum Jarvis, who had swum in the semi-final on Tuesday in order to allow Scott to rest, did not make an appearance on the podium but is due to receive an Olympic gold medal.

Deans victory means he becomes the first male swimmer since 1908 to win two golds at one Olympics, following on from Henry Cotton and also Rebecca Adlington who achieved the same feat in the women’s freestyle events at the Beijing Olympics in 2008