Giant Jellyfish spotted off the coast of Granada in Spain 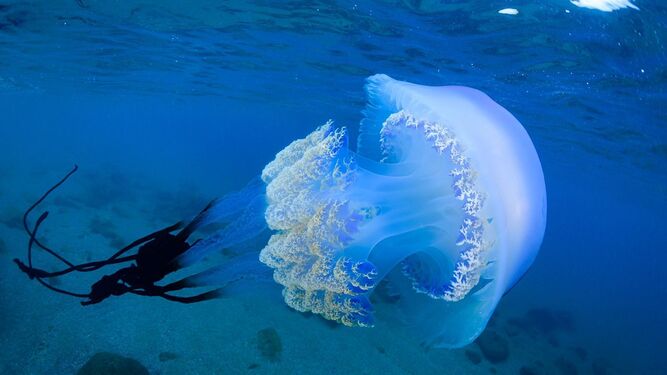 Giant Jellyfish spotted off the coast of Granada in Spain. image: Twitter

Giant Jellyfish spotted off the coast of Granada in Spain that is very rare in Mediterranean waters.
Summer is the time when the beach and the sea take up most of our free time. In these environments, however, it is very common to encounter jellyfish.
Forecasts for 2021 pointed to a volume of these animals similar to that of the summer of 2020, although with a certain upward trend compared to last summer.
What the forecasts did not point to was the discovery off the coast of Granada of a species that had not been sighted for more than a decade. The type of jellyfish corresponds to the species Rhizostoma Luteum and its presence in Mediterranean waters is very rare- they can weigh up to 40 kilos in weight!
The news emerged a few weeks ago when a giant-sized jellyfish appeared on the beach of Motril, in the province of Granada. At the same time, two others appeared in the water of Salobreña, also in the province of Granada.
The particularity of this species is that it is a very unusual type of jellyfish on the coasts of the Mediterranean Sea. In fact, this invertebrate was discovered in Spain in 2012, on the coasts of Murcia, Almeria, Malaga and Granada, where up to 50 sightings were reported.
Experts from the University of Granada have analysed the species found on the coast of Granada, confirming that it is Rhizostoma Luteum.
However, despite their large size, researchers have already confirmed that its sting does not carry a high danger, beyond the known irritations: “Normally the skin only reddens on contact and does not pose a great discomfort as other more frequent species and small jellyfish that arrive en masse to the coast. Even so, it is best to avoid contact”.
Luis Sánchez Tocino, a marine biologist at the University of Granada, explained that the characteristic colour of these invertebrates is translucent white with violet spots. As for their body composition, they have long arms and a dark-coloured terminal part.
The UGR has also reported on the life cycle that this species can have. After 72 hours, four tentacles can be formed and after two or three weeks they have a cup shape, reaching a number of between 8 and 12 tentacles, as well as a developed hypostome (The hypostome (also called the maxilla, radula, or labium) is a calcified harpoon-like structure near the mouth area of certain parasitic arthropods). In addition, Rhizostoma luteum differs from other types of jellyfish in that the former can live in complete symbiosis with other types of organisms.
Experts have asked bathers that if they see some of the jellyfish belonging to this species, they should move away carefully but not try to remove them from the water, or even interfere, but let them follow their natural course.