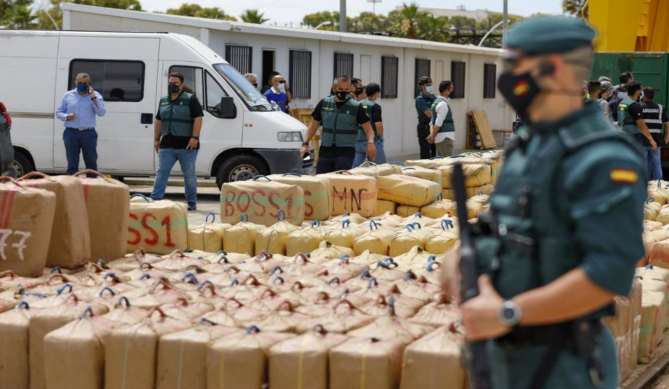 The Guardia Civil and Agencia Tributaria, in cooperation with the Portuguese Judicial Police have dismantled an organised crime network involved in large-scale drugs trafficking, arresting eight of its members. The criminals were about to smuggle 15 tons of hashish into Spain when they were arrested.

The investigation began at the end of last year after the Spanish investigators uncovered an organised crime group smuggling hashish from Morroco to Spain using different types of vessels. Europol’s European Financial and Economic Crime Centre (EFECC) assisted with the analysis of the criminals’ financial transactions, mapping out the full network spread out across Spain and Portugal.

The investigation quickly focused on one particular vessel – known as the Seefuchs acquired by the criminal group in November 2020. The vessel was moved by the criminals to the Portuguese town of Portimao, where they changed its colour and increased its storage capacity.

In June of this year, the Seefuchs set sail to Morocco, under close surveillance from the Guardia Civil and other agencies. Once the drugs were loaded onto the vessel, the criminals sailed back towards the Gibraltar Strait. The vessel was stormed by Spanish law enforcement some 100 nautical miles south of the Spanish coast.

During the Guardia Civil’s assault, five individuals were arrested and 15 tons of hashish seized in the boat’s cargo. Five house searches were carried out simultaneously across Spain, resulting in the arrest of three other members of this same gang, together with the seizure of €60,000 in cash. A luxury yacht which was also used for drugs transportation was seized in Lanzarote.

A Europol specialist was deployed to Spain during the action day to support the authorities with the cross-checking in real time of operational information gathered during the raids carried out on that day.

This operation was carried out in the framework of the European Multidisciplinary Platform Against Criminal Threats.