Malaga's Fuente de Piedra lagoon has been abandoned by flamingos 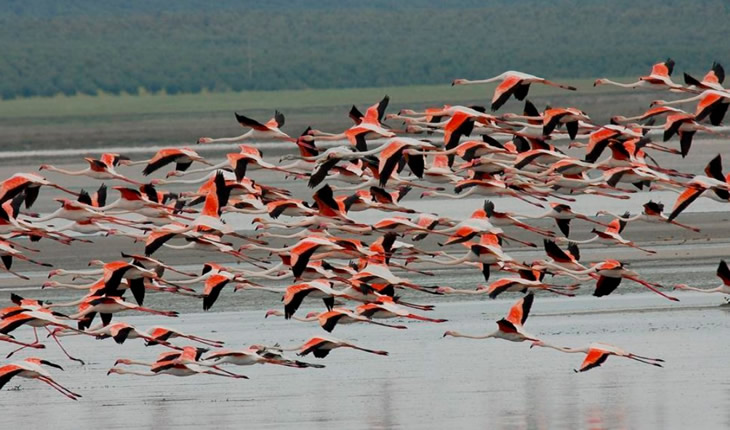 Malaga’s Fuente de Piedra lagoon has been abandoned by the thousands of flamingos that normally breed there, due to the drought conditions

The extensive 1,400-hectares of wetlands that make up Malaga’s Fuente de Piedra lagoon is normally the seasonal breeding ground of around 8,000 pairs of flamingos, and although the lagoon accumulated sufficient water during the Winter period, the intense heat, coupled with the lack of rain in Spring, has led to the lake completely drying up.

This has resulted in the approximate number of 6,000 pairs that had already made their laying in Fuente de Piedra, abandoning the area in search of other wetlands in which to reproduce, with sources from the International Union for Conservation of Nature (IUCN) telling Efe that this action of abandonment is very rare, and that only three precedents exist previously.

Marta Luque, from the wetland visitor guide, points out that “nothing like this has occurred in the twenty years that I have been here; Yes, there were years with little water, and they did not breed, but this time it has been a massive abandonment of the spawns”.

A census conducted by the Junta de Andalucia in 2020 in Fuente de Piedra, counted 19,413 specimens of this wading bird, whose pairs hatch just one single egg.

The spring of 2020 allowed the breeding of 8,000 pairs on the island of the lagoon, where they seek protection surrounded by a sheet of water that is normally about 30 centimetres deep, but, this year, according to the IUCN source, the rainfall dropped from an average of 460 litres per square metre, to 287, still enough for about 6,000 couples to settle.

According to data from the State Meteorological Agency, Spring 2021 was the driest in the last fifteen years, sunnier than normal, and somewhat warmer in central Andalucia, and in Fuente de Piedra it rained only 1.1 litres per square metre in May, causing the lagoon to dry up, by which time, most of the flamingos had laid, and their abandoned eggs have since been eaten by the numerous predators.

It is reported that the flamingos have relocated to the still humid areas of Marismas del Odie, in Huelva province, which is still flooded,  so this year a third breeding nucleus has appeared, according to one of the guides of this wetland, as reported by laopiniondemalaga.es.