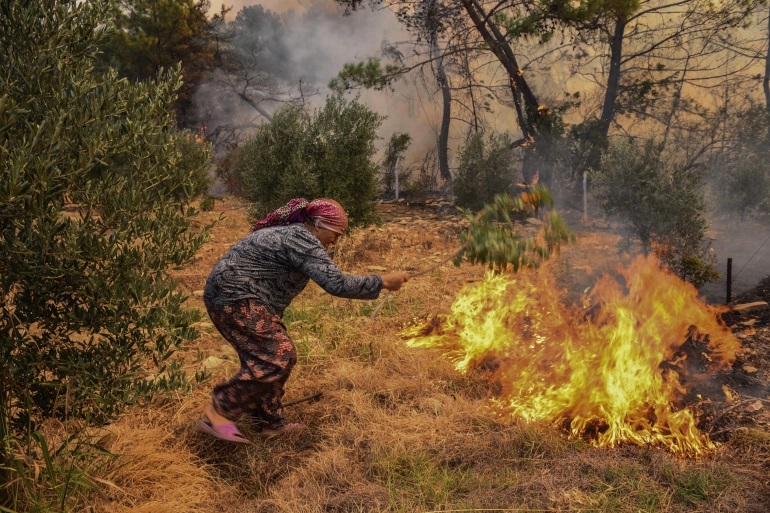 Turkish President Recep Tayyip Erdogan has declared parts of southern Turkey ravaged by wildfires as “disaster areas”, with the death toll from the fires rising to six after two forest workers were killed while trying to stem the blaze.

Fires across Turkey since Wednesday have burned down forests, encroaching on villages and tourist destinations and forcing thousands of people to evacuate.

Panicked tourists could be seen hurrying to the seashore to wait for rescue boats after being told to evacuate some hotels in the Aegean resort of Bodrum due to the dangers posed by nearby wildfires, Turkish media reported.

Coast guard units were leading the operation and authorities asked private boats and yachts to assist in evacuation efforts from the sea as new wildfires erupted. Video showed plumes of smoke and fire enveloping a hill close to the seashore.

Turkey has blamed some previous forest fires on arson or outlawed groups such as the Kurdistan Workers Party (PKK).

Erdogan said the government would provide compensation for families who lost their homes or agricultural lands. He said taxes, social security and credit payments would be postponed for those affected and small businesses would be offered credit with zero interest.

“We cannot do anything beyond wishing the mercy of God for the lives we have lost but we can replace everything that was burned,” he said.

Erdogan said the number of planes fighting the fires had been increased from six to 13, including planes from Ukraine, Russia, Azerbaijan and Iran, and that thousands of Turkish personnel, as well as dozens of helicopters and drones, were assisting the firefighting efforts.