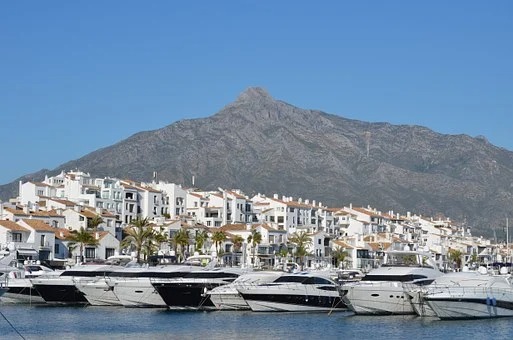 Tanja Dexters, the well-known model, who was Miss Belgium in 1998, was involved in a public fight on the main front-line road of the Marbella jet-set resort of Puerto Banus this past Tuesday, July 27, which was caught on film by a witness of the punch-up, and the Whatsapp footage has since gone viral.
In the video footage, Ms Dexters and her boyfriend, Michael Peeters, can be seen involved in a fight with another couple, with the model at one point on the ground grappling with the other woman, next to the rows of docked multi-million euro yachts of this famous Marbella resort.
Omar Souidi, the couple’s lawyer, has faced the press and explained what happened, and in an interview with the Belgian publication HLN, he pointed out that the couple had been spending a few days having a break in Marbella, as can be seen on Instagram footage as well.
Mr Souidi reported that the man in the white shirt in the video, who is seen hitting Michel, allegedly has an access pass to Puerto Banus, and wanted to park his car there on the front near the boats, but that Tanja, Michael, and a group of friends did not allow him to pass and park, which resulted in the driver allegedly running over the toes of one of the group with his vehicle.

According to the lawyer, this is when Michel indicated to that man that he should calm down, but the discussion heated up, and reached the point where the driver got out of his car and ended up in a fight with Michel, while the man’s female passenger also got out of the car and got involved in a fight with Tanja.
Eventually, the situation calmed, and Mr Souidi assures that the couple will not be pressing charges, but that Ms Dexters suffered from the embarrassment from the incident since many Belgians frequent that area of the Costa del Sol who will have recognised her.
The lawyer also explained to HLN that he believes the couple will be acquitted in the pending trial for cocaine and marijuana trafficking, while the model faces six months in prison for trafficking in viagra, and was recently found guilty, according to the same Belgian newspaper, of running over a person and fleeing, as a result of which, she lost her driver’s license for at least six months, as reported by sevilla.abc.es.