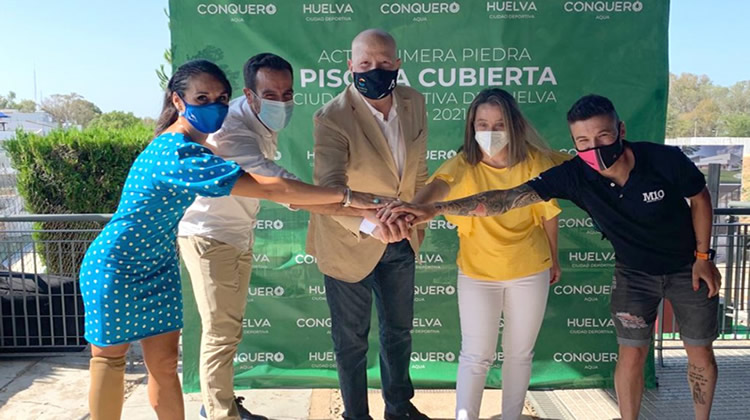 HUELVA’S Sports City project, after being suspended in 2011, is finally underway

Javier Imbroda, the Minister of Education and Sports of the Junta de Andalucia, on Thursday, July 29, laid the traditional first stone of the new covered swimming pool of the Ciudad Deportiva de Huelva, which includes a new gym and the reorganisation of the access spaces to this Junta facility, a historical vindication of this city, after the first project had been suspended back in 2011.

Mr Imbroda has affirmed that a society “with a view from sport is a better society. Not only for great champions on the field, but also champions in values, in life”, adding, “this first stone is a great day for Huelva and for all its citizens, a great lung for the city that every day will be better conditioned”.

With a budget of €6,965,988.64, this 30-month project is the first phase of a comprehensive reform of the Sports City, in the 32,000m² of Moret Park, which will eventually reach €12 million, an unprecedented investment in Huelva province, and one that responds to the commitment of the Andalucian Government to facilitate sports practice for all citizens.

In parallel to this project, other actions are being carried out that are transforming the current access building with a new image at the Conquero Club, with an investment of €370,000, of which €313,000 has already been executed.

This new building is located in the north area of ​​the Sports City and is formed by two prisms joined together, of which, one of the pieces is the glass dome of the 25-metre pool with its basement of facilities, and the other section is the changing rooms and the gym, with the entire building developed on two floors.

On the upper floor are the lobby, changing rooms, toilets, other general services, and the two swimming pools, then from this floor you go down to the lower floor at the level of the sports courts where the gymnasium and the facilities rooms are located, from where you can view sports activities at the track level.

The building design will have a functional character, with the use of materials, construction elements and current technologies, with reference to Mediterranean architecture, and emphasising the economy of maintenance and durability of the materials, while also meeting sustainability criteria, with passive and active energy-saving systems, and respect for the environment.

All public accesses to Huelva’s Sports City, both exterior, and interior, to the sports and auxiliary spaces, are adapted for use by people with reduced mobility, as reported by juntadeandalucia.es.