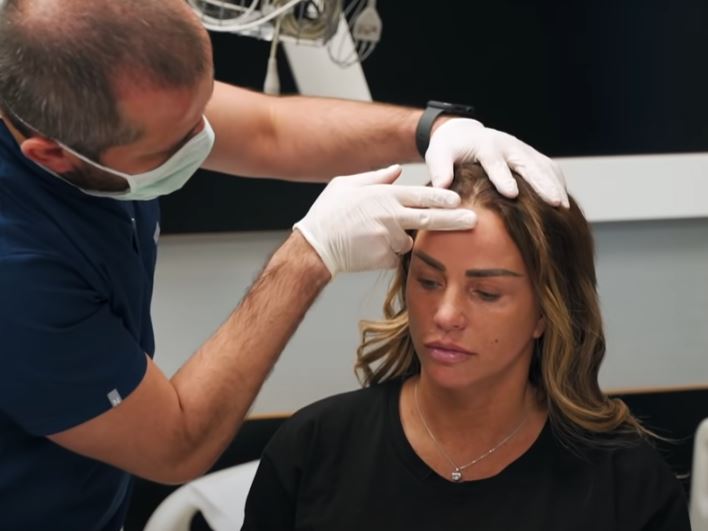 Katie Price ‘sobs’ as surgeon refuses to pull her skin into ‘cat woman face’ during her surgery in Turkey.

Katie Price has taken to YouTube to share a new video where she talks of how she had full body liposuction and also eye and lip lifts along with having her bum injected with fat too. The doctor would not give her exactly what she wanted though and refused to give her a full facelift.

The procedures happened in Turkey, something which the former glamour model took some flak for due to travel restriction at the time, and the fact that she left Harvey at home, but he was well looked after.

Katie has been flaunting her new look on Instagram and many fans have commented on how she resembles Catwoman, a famous comic book character. In Katie’s latest video on YouTube she shared the consultation with the surgeon.

Katie did not look impressed when the surgeon had to tell her that he would not be able to perform all the surgery that she wanted. In fact, he said the “only thing” he could do concerning her forehead was Botox.

Katie asked the surgeon: “So you can’t lift like this?”

He said: “It’s not good for your face, your skin is too tight.”

She then pretended to sob and said: “So here’s me thinking I’m going to have a facelift here and here, but he doesn’t recommend it and he’s the surgeon.

“I could sit here now and say: ‘No, I want it like that’ but then he wouldn’t be a good surgeon – because there are surgeons out there who will say: ‘Yeah, I’ll do it.'”

She told the surgeon: “I thought that’s what I’ll be doing but because you said no I’m listening to you as you’re the expert.”