Malaga's third hospital is presented by the Junta de Andalucia 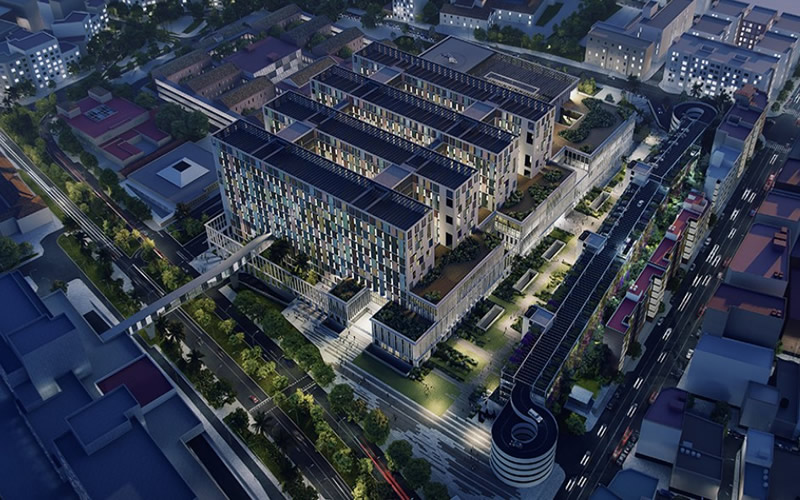 Juanma Moreno, the president of the Junta de Andalucia presented on the morning of Monday, August 2, the preliminary project for Malaga city’s third hospital, designed by the Temporary Union of Companies (UTE) comprising the architecture studios of Lamela and Aidhos, together with the consultants Sener, and ARCS.
In a speech, the president pointed out that the new hospital in Malaga will be a first-rate hospital for a first-class province, and for a first-rate Andalucia, stressing at the same time that it is a project of strategic interest, a demonstration of the importance of collaboration between institutions, and one more proof of how the Andalucian Government responds to the needs of Malaga.

This new complex, with an investment of €375 million, will be constructed in the Civil Hospital car parks, with a total built area of 270,300m², of which, 197,600m² will be dedicated to the hospital building itself, and the other 73,600m² will be the parking area and an unloading bay.

The new building will be connected to the Maternal and Child Hospital by a walkway that will run over Avenida del Arroyo de Los Angeles, where it will also have its main access, with its main building divided into four towers, with each containing 15 floors, 12 above ground, and three underground. The hospitalisation area, which occupies eight complete floors, will have 27 units and 810 rooms, and in addition, 108 positions will be awarded to the day hospital.

An area of 9,200m² in Malaga’s third hospital will be allocated to the Emergency and Biological Hazard area, with the Diagnostic and Imaging area covering another 4,000m², containing three MRIs, three haemodynamics, 10 CT scans, a remote control, eight conventional ones, 10 ultrasounds, three accelerators, and a reserve space, while four Intensive Care Units (ICU) with 66 boxes will be operational.

The Surgical area will comprise 42 operating rooms, four hybrids, two hemodynamic rooms, and 48 posts for major outpatient surgery, plus 198 outpatient clinics, and 31 special examination rooms, with the facility having its own Teaching and Research area, as well as parking for 2,000 vehicles.

“This is a hospital that can mark a before and after within hospital architecture”, said Carlos Lamela, from Lamela studios, who, together with Alfonso Casares, from Aidhos, are the two architects of the project, a partnership that carried out the design of the Liverpool University Hospital, adding, “It is a hospital conceived as a hyper-efficient machine, not only in its functionality, but also in the consumption of its resources”, as reported by laopiniondemalaga.es.