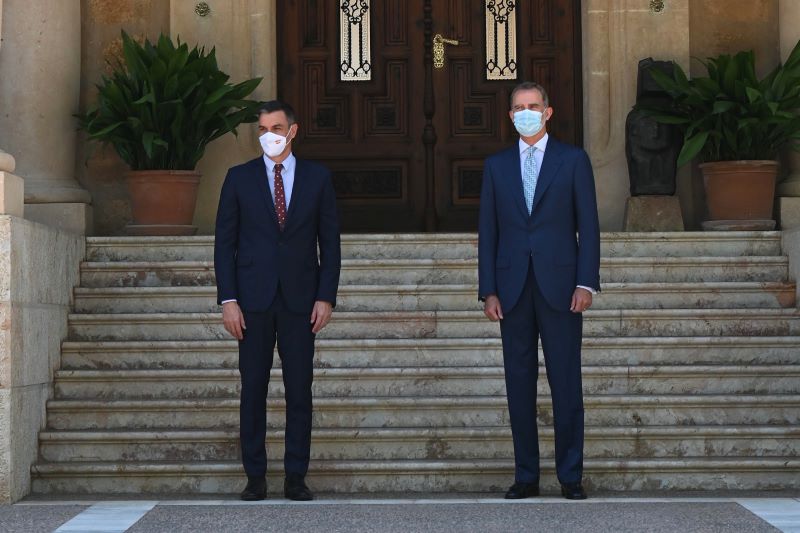 SPANISH Prime Minister Pedro Sánchez received by King Felipe VI at Marivent Palace in Palma on Tuesday August 3.
His duty was to update the King on developments since their last summer meeting in Palma.
“A year ago, we had a Spain resisting the pandemic and today we are facing a completely different scenario,” Sánchez observed.
He highlighted how, in his last visit to Palma, the world was far from having a vaccine against the virus responsible for the pandemic, while today, Spain has more than 57 per cent of the population fully inoculated and is a leader in the vaccination process.
In addition, thanks to an agreement approved on August 3 by the Council of Ministers to incorporate 3.4 million additional doses in August, Spain is approaching the goal of 70 per cent of the public being vaccinated fully before the end of this month.
Sánchez expressed his satisfaction with the data on affiliation and unemployment released on the same day, in which unemployment fell by 197,841 people in July, surpassing the record falls of the previous two months, and affiliation has grown by 133,000 workers in July and is on the verge of reaching pre-pandemic levels.
Finally, he pointed out how the European funds agreement has radically changed the scenario in the last year, thanks to which Spain will receive €19.5 billion in 2021, of which 55 per cent will be managed by the Autonomous Communities.
“The Government of Spain has a firm commitment and it is with the recovery, with not leaving anyone behind and with the fact that the whole of Spanish society is the protagonist of this recovery” Sánchez concluded.
Following this audience, the Prime Minister then met with the President of the Balearic Government, Francina Armengol in Palma to discuss matters that will affect the Balearics.
Armengol, thanked the Prime Minister for “the opportunity to work together for the interests of our citizens” and also stressed that during the meeting the “hopeful and necessary strategy” for the Balearics was discussed especially in relation to European funds and the need for them to serve to modernise the economic model of the Islands.
Thank you for reading ‘Pedro Sánchez received by King Felipe VI at Marivent Palace in Palma’ and remember that all articles produced by Euro Weekly News may be accessed free of charge.