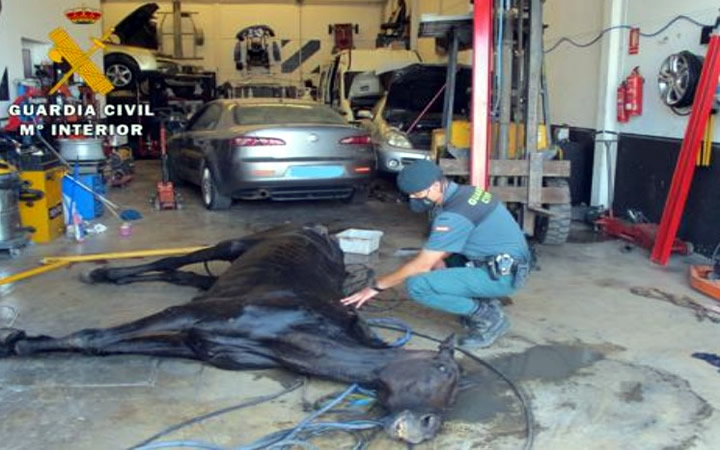 Seprona officers from the Guardia Civil’s Aznalcollar barracks are investigating an individual in the Sevillian municipality of Salteras, who owns a clandestine workshop in the Los Llanos Business Park, after he was found to be in possession of a horse that was in a poor state of health.

On July 21 the Guardia Civil had learned of the existence of a horse in poor condition, which was at the entrance of a warehouse located in the Los Llanos Business Park, and upon paying the location a visit, they discovered the presence of an adult horse, at the exterior entrance of a mechanical workshop, clearly in very poor hygienic sanitary conditions.

The animal was lying on the ground, without being able to get up, and with a marked state of nervousness, even putting his head underneath of one of the parked cars as it did not have shade to shelter, while it is noteworthy that on the day the events occurred the maximum temperature reached was 38ºC.

Once the person in charge of the horse appeared, with the help of a forklift provided by him, it was possible to move the animal into the workshop, in order to protect it from the sun, and to try to hydrate it.

A registered veterinarian was called to the scene, who provided urgent clinical assistance, but, after being given analgesics, intravenous serum, and other medications, the animal still did not respond favorably, so the veterinarian proceeded to euthanise the animal in order to avoid further suffering.

The veterinary report revealed that the animal was in a state of cachexia, with dyspnea, and with very high cardiac activity, and the expenses derived from the veterinary assistance, and the expenses of the removal of the corpse, were assumed at first, and in a subsidiary way, by the City Council of Salteras, but the Aznalcollar Guardia Civil proceeded to impute, as investigated, not arrested, for an alleged crime of animal abuse against the owner of the animal, a neighbor of Valencia de la Concepcion.

It turned out that the person under investigation, the same person who runs the mechanical workshop, was fined back in 2015 for not have the required authorisations for the operation of this type of activity, and so, upon finding that the conditions of the workshop have not changed, the Guardia Civil proceeded to issue the corresponding administrative sanctions, reiterating the facts to the competent authorities in the matter, as reported by sevilla.abc.es.