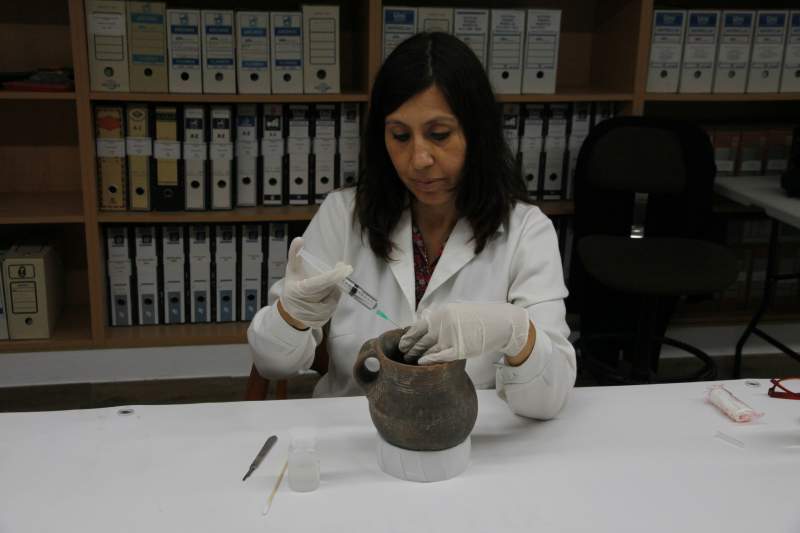 PREHISTORICA GEM: The L’Orant Jug that was made 7,000 years ago Photo credit: Alcoy city hall

Stay-at-home THE L’Orant Jug, approximately 7,000 years old and decorated with schematic figures, was discovered in Cova de l’Or (Beniarres) in the 1950s and is now fully restored.  Following loans to other museums in the past, it will now remain permanently in Alcoy’s Archaeological Museum to guarantee its conservation.
Filling up LAST month the Costa Blanca received a million tourists, of whom 85 per cent were Spanish, hoteliers’ association Hosbec revealed.  This was 30 percentage points below 2019’s figures, but double those of 2020, prompting Hosbec to predict a possible 90 per cent occupancy for first-line establishments during August.
Family fury POLICE had to go to the aid of a 19-year-old driver whose car hit a child of seven near the General Hospital in Alicante city.  The boy’s family attempted to attack the young woman after he was injured by the car’s side-view mirror in circumstances now under investigation.
No thanks ALICANTE province has 47,000 over-50s who refused the anti-Covid vaccine, citing fear or suspicion, especially of Astra-Zeneca and Janssen side-effects, according to Spain’s Ministry of Health.  Meanwhile, Valencian Community figures show that 100 per cent of the region’s over-80s are immunised and 97.8 per cent of the over-70s.
Rogue drone THE Air Unit belonging to Benidorm’s Policia Local is now using equipment that can detect and jam the frequencies and position controls of rogue drones. Last week the unit tracked and identified an unauthorised operator who now faces a fine from Spain’s Aviation Safety and Security Agency (AESA).
Hard up A BANK OF SPAIN survey found that living costs in the Denia-Javea area (Benissa, Teulada, Els Poblets and Benitachell) are lower than in Madrid, Palma or Calpe (classed as Costa Blanca) but more expensive than Alicante, Murcia or Gandia.  In contrast, Denia-Javea’s average wage is the Valencian Community’s lowest.