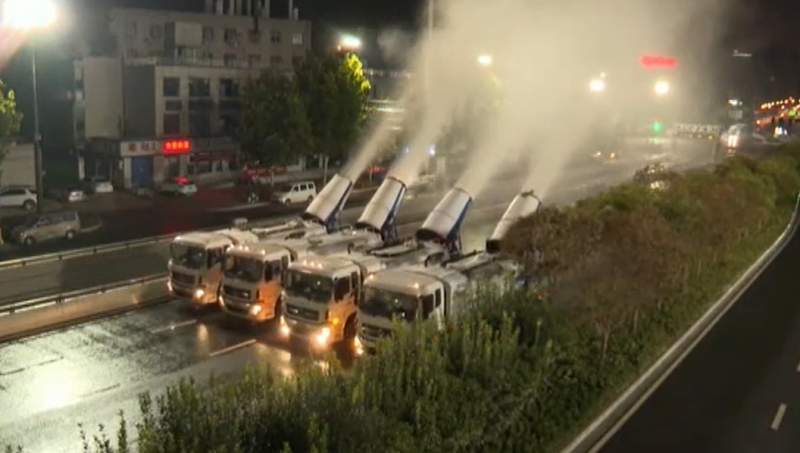 China shuts airports and railway stations and begins a massive disinfection campaign over the rapid rise of the Delta variant in the city of Zhengzhou.

China has shut airports, railways, shopping centres and hospitals and begun a massive disinfection campaign due to concerns over the rapid rise of the Delta variant, according to a report from Xinhua Chinese state media news.

The authorities have also closed the airport and alerted the population about the cancelled trips, this comes as China registered the highest number of infections in the last six months.

The city of Zhengzhou, the capital of central China’s Henan province, has further strengthened the prevention and control of the epidemic following a recent outbreak of infections. Since Friday, dozens of specially fitted out trucks and hundreds of personnel on foot have been disinfecting the main streets and pavements of the city.

The disinfectants have been sprayed mainly in the TGV stations and their surroundings, in railway stations, in hospitals and large shopping centres, among others.

Zhengzhou has also suspended intercity passenger bus services and reduced the frequency of city bus departures to just a few per hour- basically down to zero for a city of this size.

Henan reported 21 confirmed cases of local transmission of COVID-19 and 102 asymptomatic cases between July 31 and August 5 during the latest outbreak of COVID-19.

On a national level, the Chinese authorities imposed significant travel restrictions on Tuesday, August 3, including the temporary closure of airports and travel alerts to the population about internal displacement, due to the delta variant, which was first detected in India.

The outbreak began in the city of Nanking, in the province of Jiangsu (east), where nine airport cleaning workers tested positive on July 20, an outbreak apparently related to a flight from Russia, after which the infections have spread to several cities, including Beijing and Zhangjiajie.