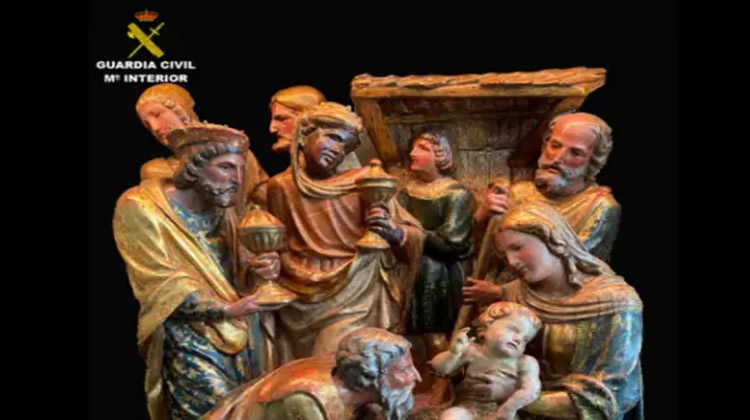 Guardia Civil officers in Zaragoza have carried out a series of operations that resulted in the location and recovery of several ancient relics that had been stolen, which are of significant historical value, including three Renaissance polychrome wooden reliefs, a book by Galen that was published in 1609, and important historical documentation belonging to the Casa Señorio de Lazcano.

In October 2020, efforts began to try to recover three Renaissance polychrome wooden reliefs, that were made between 1530 and 1532, representing the narrative scenes of The Epiphany, The Annunciation, and The Resurrection of Christ.

These reliefs were studied by an Aragonese art expert, who had been contacted by the Catalan auction room to which the current owners had offered them for sale, after having been acquired by their parents from an antique dealer in the nineties, with the expert quickly recognising without any doubt that they were three of the five objects stolen from the altarpiece of the Zaragozan parish church of Santa Maria la Mayor de Olves, in January 1989, worth an estimated €150,000 (£127,000).

They were taken to the Historical Heritage Section of the UCO from the city of Barcelona to Calatayud in Zaragoza, where they have been deposited at the judicial disposal, to be the object of a detailed study to determine its state of conservation.

A complaint filed by the current Duchess of the Infantado, led to more than 250 documents belonging to the historical archive of that house being located – whose total price could reach €10,000 – after investigators spotted them being offered for sale on an internet sales portal, and although the files have not yet been authenticated, they have been deposited at the judicial disposal in the National Historical Archive in Madrid.

After these 250 files were located, the investigation led to the discovery of 200 more deposited in historical archives of a facility that produced a mandatory purchase invoice, having acquired them in good faith.

In another stroke of good fortune, the owner of an old bookstore contacted the Historical Heritage Section of the UCO, alerting that a person was trying to put up for sale a volume of a four-volume collection of Galen’s work –  the father of medicine – whose work had been published at the beginning of the seventeenth century, with the book containing the original stamp of the Central University, historical denomination of the Complutense University of Madrid.

This book had reportedly been stolen from a library in the second half of the 20th century, and when investigators traced and located the seller, the publication was found to be in a very good state of conservation, and after being deposited at the judicial disposal, it was placed in the library where it is registered, as reported by larazon.es.