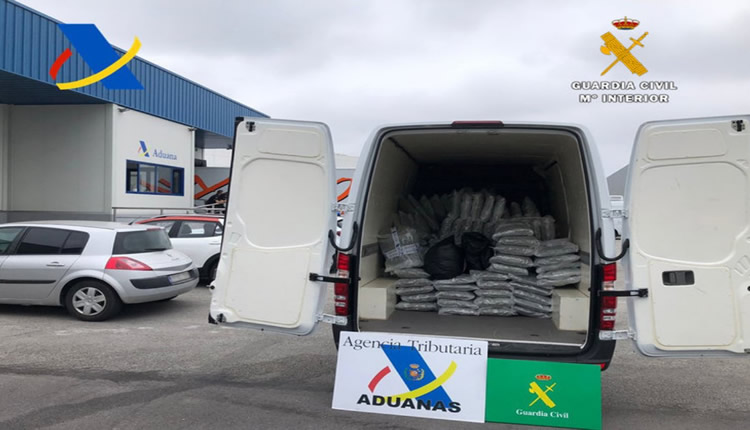 Two British nationals have been arrested in the north of Spain, after a vehicle they were travelling in was found to have 283kg of marijuana hidden on board, as they were waiting to board the Santander ferry to cross back to the United Kingdom, on July 21.

The incident occurred as the two men were in the customs area of Santander Port, waiting to drive their van onto the ferry, when their vehicle attracted the suspicions of Customs officers, who subsequently carried out a search of the van, though at first, they did not find anything out of the ordinary, with the police sniffer dogs not making any discovery.

It was at this point that Customs Surveillance Officials of the Tax Agency in Cantabria and the Basque Country, and members of the Cantabrian Civil Guard, belonging to the Fiscal Section of the Santander Pier, proceeded to inspect the vehicle with specialised equipment – known as ‘Medusa’ – that is designed to detect illicit goods.

‘Medusa’ carries out a radiological inspection on vehicles, and in this instance, it detected 283kg of marijuana inside 251 packages that had been stowed in the front part of the van, camouflaged in cardboard boxes, in the hope of avoiding detection, a location that was inaccessible to the previous sniffer dogs, but once the truck had been opened up properly, a strong smell could be noticed, which immediately led to the drugs being uncovered.

As a result, the bust saw the two Brits arrested on charges of suspected drug trafficking, and were placed at the disposal of Santander’s Court No2, where they went in front of a judge for sentencing, and were subsequently sent to prison, with an investigation reportedly still continuing, as reported by ifomo.es.