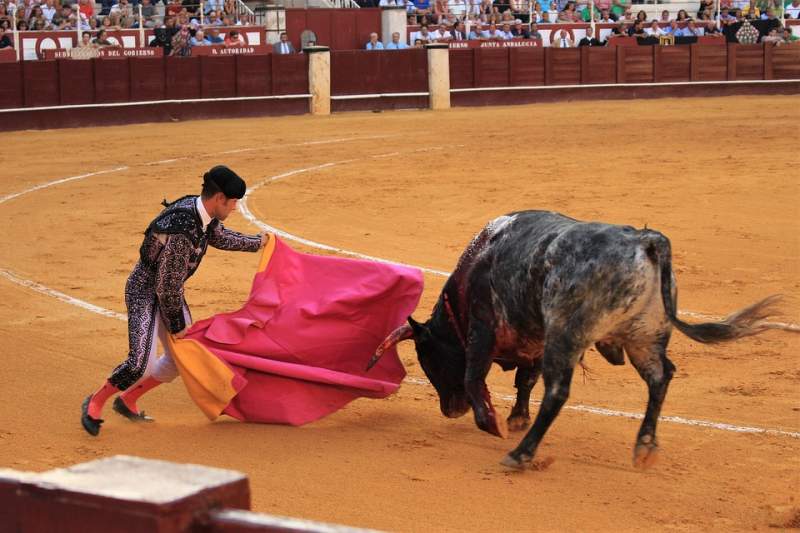 Police in Spain are investigating the death of a bull after it escaped a bullring and was rammed by a car.

Police in Spain are investigating the death of a bull, weighing half a tonne, after the animal pushed its way out of a bullring, injuring two people, and was rammed by a car in the street.

The incident happened on Sunday, August 8, as people in the small village of Brihuega had gathered to take part in a Concurso de Recortadores. The event sees participants take turns to prove who is the most “courageous” by manoeuvring around a bull in the ring.

A video taken at the event shows the bull, Campanito, run towards the doors of the bullring, pushing his way through and entering the narrow streets.

“The bull is heading out to the street,” a voice can be heard saying in the video, as people, including organisers of the event, began running after the animal. The commentator continued: “Panic in the stands, everyone has climbed higher up.”

Two men, 73 and 64, were injured as the bull ran through the streets. Both are in stable condition after going to hospital.

A vehicle sped up behind the bull and rammed into it, an unnamed resident said: “They hit the bull until it died”.

The driver of the vehicle was identified by Guardia Civil yesterday, August 9, and are said to be investigating what happened. No arrests have been made so far.

The terrible incident has caused outrage from animal rights activists.

Sergio Torres, who heads the Spanish government directorate-general for animal protection, said on Twitter: “Shameful and terrible images in Brihuega,”

“This should be punished harshly,” he added, calling for the end of such events so they “do not continue to be the shame of our country”.

AnimaNaturalis, a rights group that has been investigating Spain’s thousands of annual events involving bulls, said it would seek court action over what it alleged as animal abuse.

“We will not let this case go unpunished,” Aïda Gascon of AnimaNaturalis, an organisation that has been investigating bull events in Spain, said in a statement.

The Guadalajara bullfighting federation, however, praised the actions of residents: “They organised and this rapid intervention prevented the animal from reaching other areas of the village where the tragedy could have been worse,” it said in a statement.