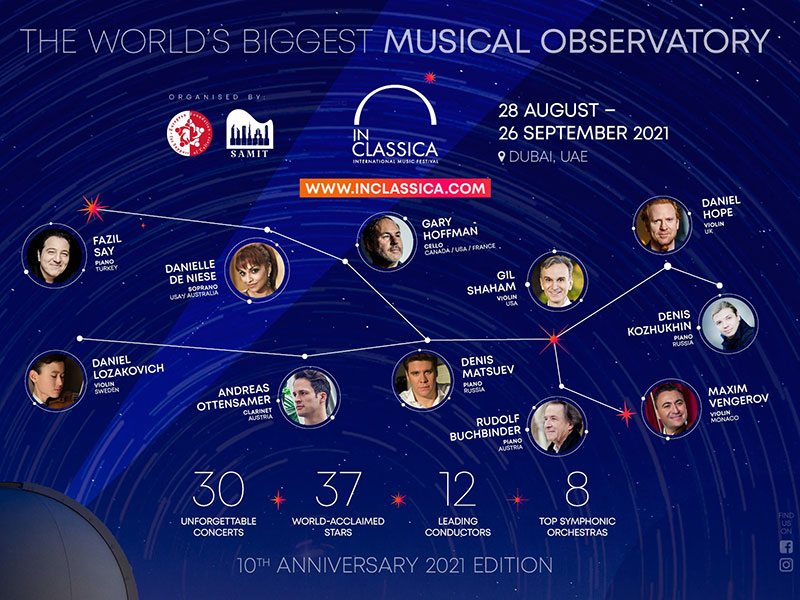 This summer, the European Foundation for Support of Culture (EUFSC) shall be joining forces with SAMIT Event Group to present the special 10thanniversary edition of its acclaimed InClassica International Music Festival. For the first time in its history, the festival will be held in the Middle East, with the United Arab Emirates city of Dubai, which has been chosen as the host for this year’s event, set to be transformed into a veritable hub of classical music between August 15thand September 26th.

Dubai’s famed Dubai Operaand Coca-Cola Arena will be resonating with a selection of seminal favourites from some of the most important composers from the classical and romantic tradition, as well as a number of premieres of new music and works by contemporary composers, including those of Composer-in-Residence Alexey Shor.

Moreover, in addition to this series of top concerts, the EUFSC and SAMIT shall be presenting the final stage of the Classic Piano International Competition, which marks the grand finale of the ‘14 Ways to Dubai’ series of competitions that have been held all around the world over the course of the past two years. This event, which shall be held between the 15thof August and the 3rdof September, shall see the winners of the preliminary competitions testing their abilities against each other over four gruelling rounds, with a total prize fund of €300,000 awaiting the most accomplished among them.

Furthermore, from the 4thto the 23rdof September, the EUFSC and SAMIT will also be organising the inaugural edition of the Middle East Classical Music Academy (MECMA), with multiple courses in the schools of wind, strings, and piano being offered to interested students. An array of preeminent professors and musicians from all around the world shall be leading these courses, including names like pianist Pavel Gililov (Germany/Austria), violinist Stella Chen (USA), and flautist Maxim Rubtsov (Russia), to name a few.

More significantly, the MECMCA will be incorporating a programme of daytime concerts throughout every day of its run, featuring the Kaliningrad Symphony Orchestra

(Russia) and the Armenian State Symphony Orchestra(Armenia) led by a variety of top conductors, and accompanying a host of international soloists, including violinist Andrey

Baranov(Russia), violist David Aaron Carpenter(USA), flautist Jasmine Choi(Korea/Austria), and pianist Costanza Principe(Italy), among many others. All Academy students shall be eligible to attend free of charge, and the most talented among them will even be given the opportunity to take part in these concerts, performing alongside some of the most accomplished musicians working today.

“This special 10th anniversary edition of the InClassica International Music Festival is going to be a truly wonderful event for Dubai. Nothing we have done so far compares to the scope and ambition of this year’s edition of the festival, and we have designed it to ensure that there will truly be something for everyone’s taste. Some of the top orchestras, musicians, and professors of our time shall be making the trip to Dubai, promising weeks of concerts, competitions, and masterclasses that are sure to delight and impress all those lucky enough to be joining us. I look forward to welcoming you all to this beautiful city, and have no doubt that these six weeks shall prove to be an unforgettable experience for all” – Konstantin Ishkhanov, President of the EUFSC.