Write Around the World with Richard E. Grant in Granada and Marbella 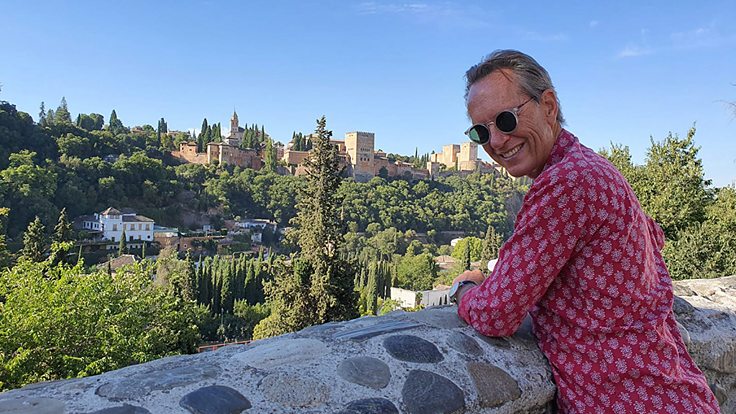 Richard looking at The Alhambra in Granada. Image: BBC

Richard E. Grant’s journey starts in the ancient city of Granada. Inspired by the writing of one of Spain’s most celebrated figures, the poet and playwright Federico Garcia Lorca, he finds out about the city’s rich Moorish heritage, its rich Romani culture, and tragic part in Spain’s civil war.
Novelist Victoria Hislop was inspired by Lorca’s life and writing, and also by a love of flamenco, when she wrote her novel The Return. Reading it, Richard learns about Spain’s policy of ‘forgetting’, which meant that there was little or no conversation about the brutalities of the war within Spain until 2007, when the law of historical memory was passed, enabling Spain finally to come to terms with its fascist past.
In the western Alpujarras, one of Spain’s wildest areas at the foothills of the Sierra Nevada mountains, Richard travels down bumpy rural roads to the spot where former Genesis drummer Chris Stewart bought a dilapidated farm called El Valero 30 years ago. Chris shows him where he wrote Driving Over Lemons, the first in the bestselling series of books chronicling his experiences of relocating to rural Spain.
The great American writer Ernest Hemingway was attracted to the romance of Spain when he first visited it as a young man in 1923. Accompanied by two of Hemingway’s most acclaimed books, Death In The Afternoon, his exploration of bullfighting, and For Whom The Bell Tolls, Richard heads to the spectacular mountain town of Ronda. He discovers the home of some of Spain’s finest food in the Eastern Alpujarras and follows Laurie Lee’s footsteps from his travelogue. Richard ends the episode and the series in Marbella, accompanied by J G Ballard’s Cocaine Nights. Write Around the World airs on BBC Four on Tuesday, 17 August, 9pm BST.