Drug smugglers intercepted in waters near the Canary Islands 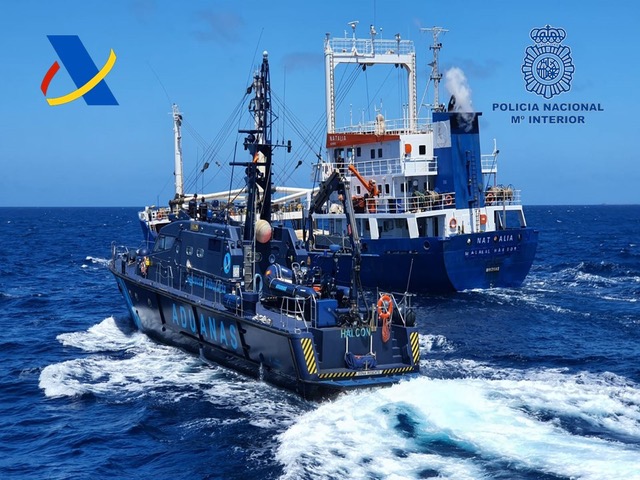 Vessel loaded with 20 tons of hashish intercepted in waters near the Canary Islands.

A joint investigation by the Tax Agency and the National Police has led to the interception of a merchant ship loaded with almost 20 tons of hashish in waters close to the Canary Islands. Following the boarding by two Customs Surveillance patrol boats of the Tax Agency, the 11 Syrian crew members of the vessel were arrested.

After boarding, officials found that the vessel was at serious risk of sinking, as it had significant water leaks and engine issues.

The Palau-flagged vessel was the subject of a joint investigation by the Tax Agency’s Customs Surveillance and the National Police as part of Operation ‘Natalia’, as well as by the French customs services DNRED.

After detecting the merchant ship close to Canary Islands waters, it was decided to intercept it as a matter of urgency. Two patrol boats from the Customs Surveillance Service, the ‘Sacre’ and the ‘Halcon’, set off on the night of Saturday August 7 in search of the target, which was boarded in the early hours of Sunday, some 40 miles southeast of Fuerteventura, in international waters.

Once the vessel was controlled and secured by the Customs Surveillance officers, the poor condition of the vessel, with multiple leaks and the risk of fire in the engines, forced the officers of both patrol boats to work hard to keep it afloat and finally reach the port of Las Palmas on Sunday night.

Throughout yesterday, Customs Surveillance officials and National Police officers carried out a joint search of the merchant vessel. As suspected by the investigators of both corps, in addition to the ordinary transport of gypsum, the merchant ship was carrying a large cargo of hashish, which was hidden in its holds. The operations have accounted for a total of 638 bales totalling 19.876 tons of hashish, which represents another major interception this year in waters close to the Canary Islands.

The 11 crew members arrested will be brought before the National Court in the next few hours, while both the Port Authority and the Maritime Captaincy of the port of Las Palmas have taken charge of the damaged vessel, assisted by Customs Surveillance officers, in order to minimise the leaks.