Met Police chief says Prince Andrew is not above the law 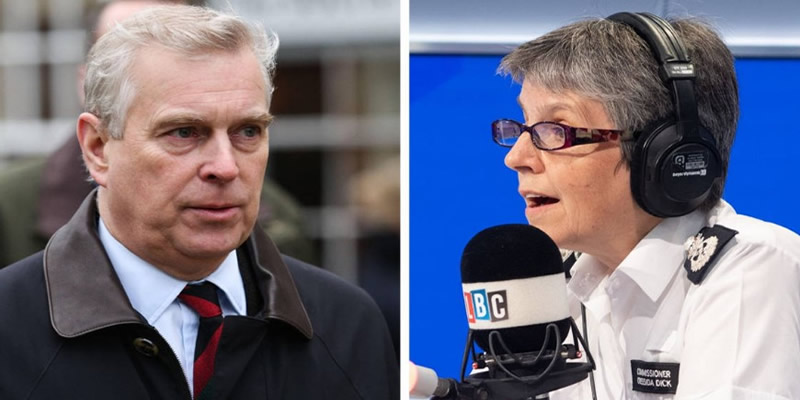 Met Police chief says Prince Andrew is not above the law. image: twitter

MET POLICE chief Dame Cressida Dick has said that Prince Andrew is not above the law, and that a review is underway into his case

During an interview with Nick Ferrari on LBC, Dame Cressida Dick, the chief of the Metropolitan Police, has said that 61-year-old Prince Andrew is not above the law, referring to a lawsuit that has been brought against him this week by American lawyers representing Jeffrey Epstein victim Virginia Roberts Giuffre, according to The Sun.

Speaking on LBC, the Met Police chief told Nick Ferrari: “No one is above the law. It’s been reviewed twice before, we’ve worked closely with the Crown Prosecution Service, we are of course open to working with authorities overseas, we will give them every assistance if they ask us for anything within the law obviously. As a result of what’s going on, I’ve asked my team to have another look at the material”.

Earlier this week, it was suggested by legal experts that diplomatic immunity, which is a privilege enjoyed by immediate members of the Royal family, will possibly no longer apply to protect the Duke of York from the allegations brought against him, as he has officially stepped back from all royal duties, although he has always vehemently denied all knowledge of even meeting Ms Roberts.

In December 2019, a constitutional law professor at University College London (UCL), Bob Morris, told the Sun Online, “Sovereign immunity is a concept devised to protect the position of heads of state, but heads of state only, not the members of their family in their function as the head of state. And you can’t have more than one head of the state. So it doesn’t apply to the members of people’s families, there is no logic in doing so”.

Adding, “Andrew is in the same position as any other UK citizen. He has no particular personal immunity, although he will be better advised than many private members in this country of course… he has access to very good legal advice and I’m sure he will now be in mind to take account of it”.

Things could get a lot worse for the Prince after Johanna Sjoberg, a former PA to the disgraced paedophile Jeffrey Epstein came forward to claim that the Duke had groped her breast when she was 21 years of age, an accusation that originally had been unable to be brought against him, due to the time-lapse, but with a new change in US law expected, this could mean a second case being brought against Prince Andrew in court in America.