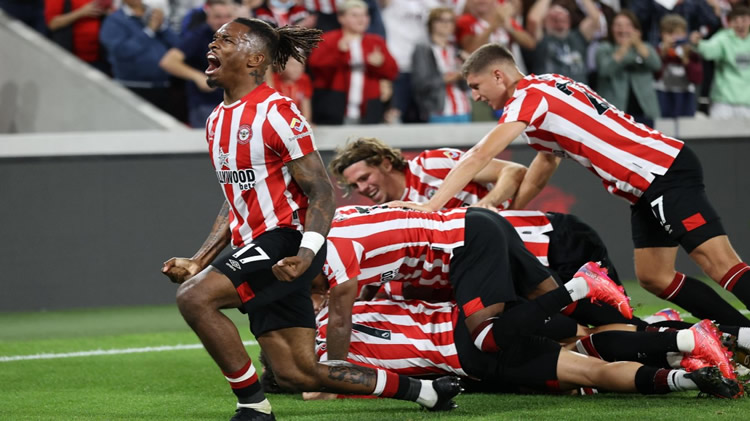 Newly promoted Brentford had a baptism of fire by being given Arsenal as their first opponents in their Premier League debut this evening, Friday, August 13, in the first match of the 2021-22 season, playing at home, in front of a packed house of very enthusiastic supporters, including England manager, Gareth Southgate.

As stats go, Brentford last played in the top-flight of English football way back in the 1946-47 season, and tonight become the 50th different club to play in the Premiership, the 10th from London, with their Brentford Community Stadium the 60th ground to host Premier League football.

Thomas Frank – who becomes only the second Dane to manage a club in the Premiership, after Michael Laudrup at Swansea in 2012 – could not have got off to a better start than for Sergi Canos to grab the first Premier League goal of this season, after wrong-footing Calum Chambers and firing a right-foot shot past Bernd Leno from 15 yards out, for 1-0 after 22 minutes, with the crowd going crazy.

A 1-0 lead at halftime was thoroughly deserved, and as the second half got underway, it was Arsenal who seemed inspired, as they finally put some moves together, but as the half progressed, it really looked like the Gunners were not going to score, and Brentford made Mikel Arteta’s evening even worse on 73 minutes, as some sloppy defending from a long throw eventually found the head of Christian Norgaard at the far post, who placed the ball beyond Leno into the Arsenal net and it was 2-0 the Bees.

This 2-0 result leaves Brentford perched on top of the Premier League this evening, with the rest of the clubs in action over the weekend, it’s really a dream start for Thomas Frank and his players.