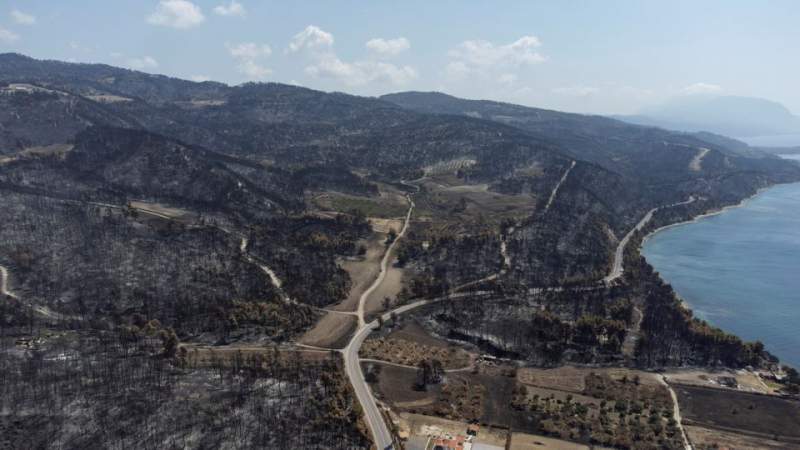 Greek island residents face the aftermath of wildfire devastation as most return to burnt-out ruins.

Residents of the Greek seaside village of Rovies are mourning the loss of a paradise of pristine pine forests and family homes that have been scorched by wildfires that burned continuously for nine days.

However, anger has no set in as they start to see how little was salvaged. The village at the foothills of a mountain, on the island of Evia northeast of Athens, had long been a popular retreat for Greek and foreign tourists, with locals also living off local produce like honey, resin and olive oil.

Wildfires have turned the forest and beehives into ashes and decimated around a dozen houses in Rovies, those on the outskirts, and dozens more across the island.

72-year old Costas Constantinidis, said: “There was a paradise here and now… it’s hell,” Constantinidis said, in tears as he stood in front of his house, much of which was destroyed by flames. My wife and I worked hard for many years to build this so we could enjoy it in our old age, and now, we must start again from the beginning.”

In Rovies, as in other villages across the island, residents said the government failed to protect their homes and the forest.

“The truth is that they forgot us,” said another resident, 87-year-old Sotiria Kalaboka. “From the beginning, the aeroplanes did not come to drop (water), to act.”

A fire brigade official said he understood people who lost their homes were upset but said firefighters had done all they could. “All firefighters, all fire engines were in the fronts from the beginning,” the official said.

“I want to tell them that I completely understand what they feel, both the pain and the disappointment, and the desperation,” he told a news conference on Thursday. “I want to tell them they will not be unassisted, the state will be close to them,” said Prime Minister Kyriakos Mitsotakis, who has publicly apologised for delays in the firefighting effort and announced a 500-million-euro relief package while defending his government’s action.