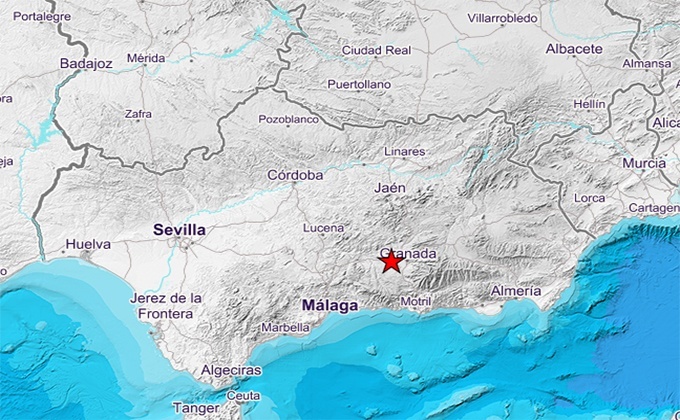 2.5 magnitude earthquake shakes Santa Fe in the province of Granada Andalucia.
After weeks of earthquakes in Granada, Sante Fe, was shaken again tonight, August 17, with a 2.5 on the Richter scale earthquake.
After the strong earthquake that had it’s epicentre in the town of Cijuela – of 4.5 degrees – last Thursday, this time it was Santa Fe’s turn to feel another one of lesser magnitude; specifically 2.5 to the southwest of the Granada town, barely perceptible to some since it has been classified as intensity 2.5.

The National Geographic Institute (IGN) has also registered two other earthquakes throughout the afternoon, both with an epicentre in the same location as the latter and of 1.6 and 1.5 degrees, at six and seven kilometres deep, respectively.
Despite the tremors experienced over the in recent days, experts predict a decrease in seismic movements. Furthermore, Jesús Galindo, professor of Internal Geodynamics at the University of Granada, pointed out that “the earthquakes have not moved to other places where they could have been of greater magnitude.”

However, the fear of a new seismic swarm has reawakened fear among the population of Granada after 23 earthquakes were registered in ten days in the province – seven of them above 2 degrees of magnitude.

Earthquakes are becoming increasingly frequent in Granada and the surrounding areas and there are genuine fears of a much larger quake striking the province after last years blackouts saw thousands of people line the streets- too scared to go back into their homes.
Related:
Two more low magnitude earthquakes shake Spain’s Granada
Earthquake of 4.2 magnitude in Granada province