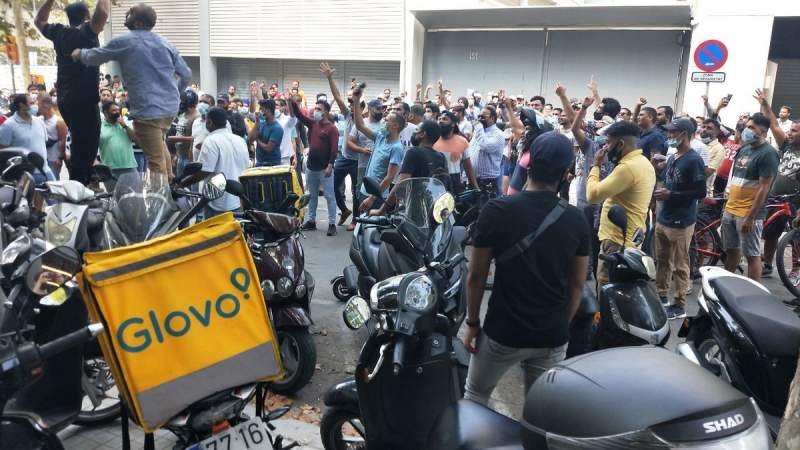 Glovo delivery drivers have staged a fourth day of protests in Barcelona over lower pay and new laws.

Delivery drivers staged a fourth day of protests over what they say is Glovo’s dubious adaptation to the new law, saying the company is forcing them to compete more with each other and charge less.

Dozens of distributors have been mobilising for four days in Barcelona against the company’s new remuneration model, which, according to them, favours those who agree to work for less money.

Glovo denies this and alleges that it is simply due to a drop in demand.

On Monday, August 16, drivers for the company took to the streets in Barcelona for the fourth consecutive day, denouncing the new remuneration model of the multinational, in force since last Thursday.

Those who gathered in front of the company offices with their bicycles and motorcycles denounced that the new system, devised by the company as a result of the entry into force of the new ‘Rider Law’, ends up favouring those riders who are willing to charge less than each order.

“I have been working for Glovo for years and we have never been so bad. They are killing us,” said one of the drivers.

Mobile phones in hand, there were many delivery men who were willing to show their invoices from the last few days and explain how they have seen their income plummet.

The cause of the anger is the introduction by the company of a variable that allows the rider to decide if he wants to charge more or less for an order (specifically, a maximum of 30% above or below the base rate).

Herein lies the problem, according to one driver, Jonathan, who explained that the company grants more orders to those who are willing to lower their charges, leaving nothing to those who aspire to charge more.

The argument is what they call the “multiplier factor.” If the company has historically calculated what it pays to riders based on several criteria – among them, the base rate, kilometres, waiting time or time slots – now they have added the latter, which depends on the courier himself.

‘He (the driver)  can decide himself whether to ‘multiply’ the order price by a range from 0.7 to 1.3. ‘ added Jonathan.

“On Thursday, when they (Golvo) informed us of these changes, I set the multiplier to 1.3. But I did not drop anything. In ten hours, that day, I only placed one order in the morning and one at night. I made 7 euros in total”, says RI, a delivery driver who prefers not to include his full name.

“Over the days, it has been falling to 0.9, which ensures that its activity has been increasing. It is clear that the algorithm of the company rewards those who accept low prices because that way they get more profit,” he added.

“It is a shame. They force us to compete with each other and charge less. If I continue like this, I’m going to get only about 500 euros: how am I going to pay the 312-euro freelance (autonimo) fee like this?” he said.