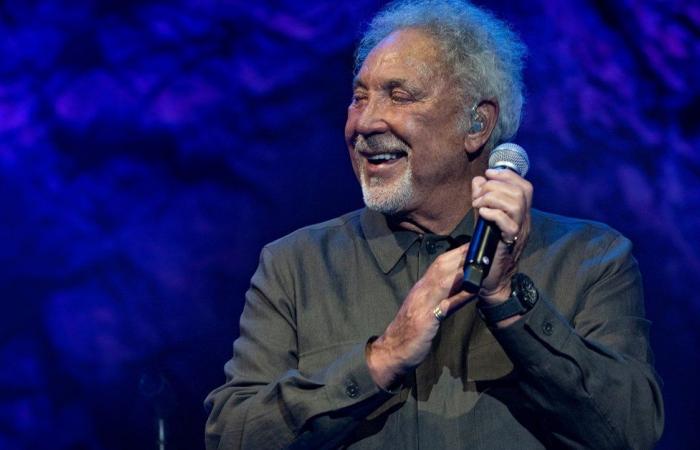 Tom Jones at The Starlight in Marbella - still rocking at 81-years-old, image: Twitter

Tom Jones and his band performed at The Starlite in Marbella on Monday and wowed the packed audience with a 90-minute set.
Sir Tom Jones returned to the Starlite auditorium in the foothills of Marbella after a few years absence and at 81-years-old rocked the appreciative audience with a 90-minute set most performers much younger would struggle to match.
A surprisingly new salsa version of It’s Not Unusual kicked of the night and straight away the crowd were snared- Jones was back- and in style!
Tom Jones’ new album Surrounded By Time debuted at No. 1 on the official UK albums chart. The UK chart crown was his first in over 20 years and also sets the record for the oldest artist ever to do so with an album of new material.

Sir Tom’s charm lies as much in his skill as a musical communicator as in his vocal chops. Slowing things down to perform the spoken-word Talking Reality Television Blues, he recalls wartime ration books, the Queen’s coronation, and being bedridden for two years with TB as a child: “So, you see, I was in lockdown even back then!”

His slick 4-piece-band provided a perfect sound bed for his supremely robust voice. Michael Kiwanuka’s I Won’t Lie is rendered as a moody electronica ensemble while ‘the master’ eased his way through Bob Dylan’s tender One More Cup of Coffee, his take way more heartfelt and affecting than Dylan could probably manage today.

Yet, the night’s highlight is the staggering I’m Growing Old. A ballad, given to Jones by its writer, jazz musician Bobby Cole, after a 1972 Vegas cabaret show. “I told Bobby: I’m not old enough to sing this yet, but maybe I’ll get there one day!” recounts Jones.

A pause, a sigh, a wink to the crowd, “And now, well, here we are!” His subsequent pitch-perfect rendition of this memorial journey through time triggering a richly merited standing ovation.

It was a memorable performance from a prodigious artist currently demonstrating no interest whatsoever in the concept of the dying of the light, may he continue to entertain us with that ‘voice from the valleys’ for a long time yet.